A Chemist’s Guide to Density Functional Theory, 2nd Edition by Koch and Holthausen :: Review: This book has been written by chemists for chemists. In particular, it has not been written by genuine theoretical chemists but by chemists who are primarily interested in solving chemical problems and in using computational methods for addressing the many exciting questions that arise in modern chemistry. This is important to realize right from the start because our background of course determined how we approached this project. Density functional theory is a fairly recent player in the computational chemistry arena. WK, the senior author of this book remembers very well his first encounter with this new approach to tackle electronic structure problems. It was only some ten years back, when he got a paper to review for the Journal of Chemical Physics where the authors employed this method for solving some chemical problems. He had a pretty hard time to understand what the authors really did and how much the results were worth, because the paper used a language so different from conventional wave function based ab initio theory that he was used to. A few years later we became interested in transition-metal chemistry, the reactivity of coordinatively unsaturated open-shell species in mind. During a stay with Margareta Blomberg and Per Siegbahn at the University of Stockholm, leading researchers in this field then already for a decade, MCH was supposed to learn the tricks essential to cope with the application of highly correlated multireference wave function based methods to tackle such systems. So he did – yet, what he took home was the feeling that our problems could not be solved for the next decade with this methodology, but that there might be something to learn about density functional theory (DFT) instead. It did not take long and DFT became the major computational workhorse in our group. We share this kind of experience with many fellow computational chemists around the globe. Starting from the late eighties and early nineties approximate density functional theory enjoyed a meteoric rise in computational chemistry, a success story without precedent in this area. In the Figure below we show the number of publications where the phrases ‘DFT’ or ‘density functional theory’ appear in the title or abstract from a Chemical Abstracts search covering the years from 1990 to 1999. The graph speaks for itself. 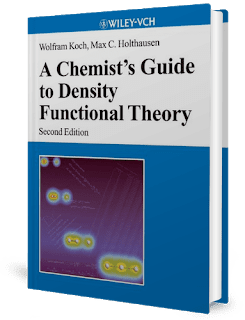 A Chemist’s Guide to Density Functional Theory, 2nd Edition by Koch and Holthausen