Home A Special Books And China Has Hands 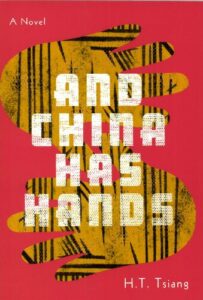 Initially published in 1937, AND CHINA HAS HANDS, the final published novel of literary gadfly and political radical H.T. Tsiang (1899 -1971) (author of The Hanging on Union Square), takes place in a 1930s New York defined as much by chance encounters as by economic inequalities and corruption. Combining the pointed, political brevity of Gertrude Stein with his very own characteristic humor, Tsiang shows us the world of 1930s New York through the eyes of Wan–Lee Wong, a newly arrived, nearly penniless Chinese immigrant everyman.

Written with a poignant simplicity that mirrors Wong’s own alienation in a foreign land, this unusually intimate portrait of coming to race and class consciousness, set against the backdrop of the Great Depression, illuminates the challenges endured by generations of Chinese who tried to assimilate into an alien culture, pining in utter obscurity for their homeland.

And China Has Hands PDF