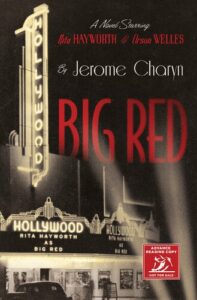 Set amidst the noir glamour of Hollywood’s Golden Age, BIG RED reenvisions the life of one of America’s most enduring icons: Gilda herself, Rita Hayworth, whose fiery red hair and hypnotic dancing helped make her the quintessential movie star of the 1940s. [From the back cover.]

Narrated by a starry-eyed lesbian, Big Red reimagines the tragic careers of Rita Hayworth and her indomitable husband, Orson Welles.

Since he first appeared on the American literary scene, Jerome Charyn has dazzled readers with his “blunt, brilliantly crafted prose” (Washington Post). Charyn is known for his funny books, but he also knows a lot about Golden Age Hollywood. He has taught film history in both the United States and France.

With Big Red, Charyn reimagines the life of one of America’s most enduring icons, “Gilda” herself, Rita Hayworth, whose fiery red tresses and hypnotic dancing graced the silver screen over sixty times in her nearly forty-year career. The quintessential movie star of the 1940s, Hayworth has long been objectified as a sex symbol, pin-up girl, and so-called Love Goddess. Here Charyn, channeling the ghosts of a buried past, finally lifts the veils that have long enshrouded Hayworth, evoking her emotional complexity—her passions, her pain, and her inner turmoil.

Charyn’s reimagining of Hayworth’s story begins in 1943, in a roomette at the Hollywood Hotel, where narrator Rusty Redburn—an impetuous, second-string gossip columnist from Kalamazoo, Michigan—bides her time between working as a gofer in the publicity offices of Columbia Pictures, volunteering at an indie movie house, and pursuing dalliances with young women on the Sunset Strip. Called upon by the manipulative Columbia movie mogul Harry “The Janitor” Cohn to spy on Hayworth, then, the Dream Factory’s most alluring “dame” and Cohn’s biggest movie star, Rusty becomes Rita’s confidante, accompanying her on a series of madcap adventures with her indomitable husband, the “boy genius” Orson Welles.

But Rusty, an outlaw who can see beyond the prejudices of Hollywood’s male-dominated hierarchy, quickly becomes disgusted with the way actresses, and particularly Rita, are exploited by men. As she struggles to balance the dangerous politics of Tinseltown with her desire to protect Rita from ruffians and journalists alike, Rusty has her own encounters—some sweet, some bruising—with characters real and imagined, from Julie Tanaka, an interned Japanese-American friend, to superstars like Clark Gable and Tallulah Bankhead, as well as notorious Hollywood gossip columnist Louella Parsons.

Reanimating such classic films as Gilda and The Lady from Shanghai, Big Red is a bittersweet paean to Hollywood’s Golden Age, a tender yet the honest portrait of a time before blockbusters and film franchises—one that promises to consume both Hollywood cinephiles and neophytes alike. Lauded for his “polymorphous imagination” (Jonathan Lethem), Charyn once again has created one of the most inventive novels in recent American literature.