Home General Subjects Books Biology Books Biological Control of Plant-Parasitic Nematodes
Biological Control of Plant-Parasitic Nematodes: Building Coherence between Microbial Ecology and Molecular Mechanisms by Keith Davies :: Biological control of pests, weeds, and plant and animal diseases utilising their natural antagonists is a well-established and rapidly evolving field of science. Despite its stunning successes world-wide and a steadily growing number of applications, biological control has remained grossly underexploited. Its untapped potential, however, represents the best hope to providing lasting, environmentally sound, and socially acceptable pest management. Such techniques are urgently needed for the control of an increasing number of problem pests affecting agriculture and forestry, and to suppress invasive organisms which threaten natural habitats and global biodiversity. 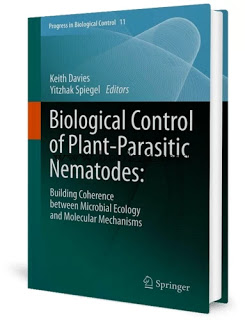 Twenty years have elapsed since that last book was published dedicated to biological control of nematodes and to this day a robust commercially successful biological control agent for plant parasitic nematodes is not routinely used. Soil supressive to plant nematodes is a well established phenomenon and yet we clearly do not understand the ecology of it sufficiently well to manipulated it in a way that we can predicatively control these important plant pests. During the last 20 years there has also been a revolution in molecular biology and we now have many techniques available to us that were only just beginning to be developed when his original book was published.

Traditional biological control scientists do not really have a clear understanding of what molecular biology can deliver and molecular biologists do not really understand the problems confronting biological control scientists. It has become increasingly apparent that each of these groups needed to walk around in each others shoes for a while, so to speak, and try and get an understanding of where each other were coming from and what may or may not be possible. The current volume focuses on a number of areas that are of importance in the area of plant parasitic nematode soil ecology, based on the multitrophic interactions between plant, nematodes and natural enemies, and also host parasite interactions, plant – nematode, nematode – natural enemy, that can now be dissected at the molecular level. By bringing all these areas together within the covers of a single book we hoped to build cohesion between these disciplines and help understand what might be possible from the point of view of biological control.