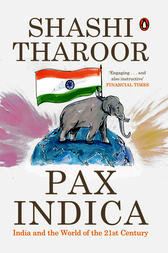 Pax Indica: India and the World of the 21st Century

The book Pax Indica: India and the World of the 21st Century, written by an Indian author Shashi Tharoor, is an emphasis on the Indian diplomacy and its role in the global world. The book gives us an insightful and an interesting coverage of India’s foreign policies and how the policies affect the common man. It also explains that in Indian politics why policies are important to an India focused on domestic transformation. Shashi Tharoor surveys and examines the major International relationships, offers suggestion about the country’s need for the required platform, along with the country’s responsibilities to maintain its position globally, making his book an informative text to the people of the world.

Shashi Tharoor in his book Pax Indica: India and the World of the 21st Century highlights the requirement and importance to move from the Nehru’s era of “Non alignment” to the 21st century era of “Multi-alignment,” which covers the working of the Ministry of External Affairs, the parliament and the public opinion, since the Independence. It is inspiring and gives a portrait of India being ready to take a global position in the new millennium. This book is another substantial achievement by one of the finest Indian authors. The book was published in 2013, available in paperback.

Pax Indica: India and the World of the 21st century was written by an award-winning Indian author Shashi Tharoor.
It is a great introduction for those interested in reading India’s foreign policy and its evolution since Independence.