Home Engineering Books Remember Who You Are by David Icke

Remember Who You Are by David Icke 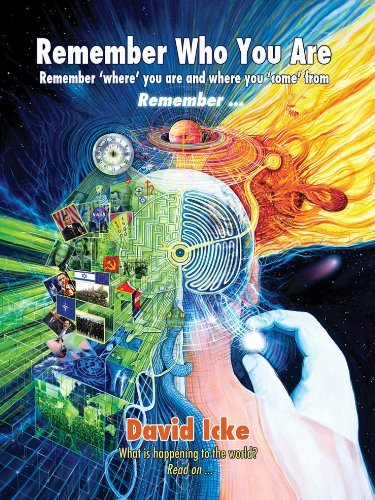 Remember Who You are Remember Where You are and Where You Come From Remember by David Icke | PDF Free Download.

“David Icke … has exposed the global network of families behind Big Banking, Big Biotech, Big Food, Big Government, Big Media and Big Pharma in book after book as his awareness has expanded — and he takes this on to still new levels of exposure in Remember Who You are … the key is in the title. We are enslaved because we identify with our body and our name, when these are only vehicles and symbols for what we Read more…

Abstract: “David Icke … has exposed the global network of families behind Big Banking, Big Biotech, Big Food, Big Government, Big Media and Big Pharma in book after book as his awareness has expanded — and he takes this on to still new levels of exposure in Remember Who You are … the key is in the title. We are enslaved because we identify with our body and our name, when these are only vehicles and symbols for what we really are — Infinite Awareness, Infinite Consciousness. We are imprisoned in the realms of the five senses and ‘little me’ when we are All That Is, All That Has Been and all That Can Ever Be. To breach the perceptual walls of the Saturn-Moon Matrix and bring and end to mass human enslavement, we need to awaken to our true identity.”–Publisher’s description

Remember Who You are Contents

Preface to Remember Who You Are

How often I hear this question in its many variations, from the polite and genteel: ‘What the goodness is going on?’ … through: ‘What on earth is going on?’… to the more ‘of the street’, though very expressive and effective: ‘What the fuck is going on?’

The latter captures the energy of the question rather well, although it might upset those who have been programmed to recoil at the use of such a word because it is ‘naughty’.

Well, it depends on how it’s used, really. It can be used abusively and aggressively, but then so can lot of other words that are perfectly acceptable to ‘moral society’; and I defy anyone to come up with a better response to hitting their thumb with a hammer than: ‘Fuuuuuuuucccccckkkkkkkkkkkkkk!!!’ It’s a sort of verbal painkiller.

It makes me feel better, anyway. And what if, by some twist of fate, the slang word for sexual intercourse had turned out to be, say, ‘sandwich’, and the word for something eaten between two slices of bread had passed from the Latin through the Greek, with some Outer Mongolian influence, to become ‘fuck’?

We would now be asking for a cheese and tomato fuck, heavy on the mayo, and no one would flicker an eyelash. But ask for a ‘sandwiching fuck’ and we would be asked to leave the shop. Humans are so funny.

So much moralizing about a word while at the same time thinking it perfectly ‘moral’ to pepper-bomb cities full of people to protect them from violence.

Media organizations in the United States can be fined ludicrous amounts of money if anyone says the word ‘shit’ on the radio, yet it’s okay to broadcast the US President announcing that he is going to bomb more children with brown faces to protect their freedom while asking the people to ‘support our troops’ in doing that.

Well, support the live troops who can still serve the mass slaughter and exploitation. Forget about the dead and maimed troops. They’re really bad for selling the next war and recruiting more bomb fodder. What a distorted sense of ‘morality’ it all is – and there is a reason for that.

We live in a ‘distortion’. But more of that later. Anyway, where was I? Yes, back to the point.

I mean, what is ‘going on’? I’ll settle for: ‘What the hell is going on?’ as a sort of middle ground, still just on the right side of ‘naughty’, yet still a little risqué to the moral extremists – ‘Don’t you say that word in this house or I’ll get the soap,’ and all that stuff.

I am sorry if I upset such people with my use of the word ‘hell’, but, if I do, well, fuck it! The time is over for pussyfooting around, talking around the point and desperately trying to avert our eyes so that we can’t see the elephant in the living room; or it had better be if we want to live in a world in any way connected to another and far more important ‘f’-word – Freedom.

We need to wake up and grow up lightning-fast and heads and sand need to part company, along with sofas and arses just as quickly (Fig 1).

The world is being bombarded with so many shocks – economic, political, military, geological and so on, and we are hurtling towards, at least at the moment, a globally centralized fascist/communist dictatorship in which the very few are dictating the increasingly fine details of the lives of the very many.

And we have seen nothing yet if heads and sand, sofas and arses continue in their current relationship. This is what is ‘going on’, but even that is only a part of what we need to know.

Download Remember Who You Are by David Icke ePUB Free.