Facing the Heat Barrier A History of Hypersonics T. A. Heppenheimer 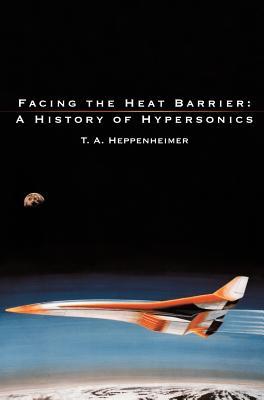 Hypersonics is the study of flight at speeds where aerodynamic heating dominates the physics of the problem. Typically this is Mach 5 and higher. Hypersonics is an engineering science with close links to supersonics and engine design. Within this field, many of the most important results have been experimental. The principal facilities have been wind tunnels and related devices, which have produced flows with speeds up to orbital velocity. Why is it important? Hypersonics has had two major applications. The first has been to provide thermal protection during atmospheric entry. Success in this enterprise has supported ballistic-missile nose cones, has returned strategic reconnaissance photos from orbit and astronauts from the Moon, and has even dropped an instrument package into the atmosphere of Jupiter. The last of these approached Jupiter at four times the speed of a lunar mission returning to Earth. Work with re-entry has advanced rapidly because of its obvious importance. The second application has involved high-speed propulsion and has sought to develop the scramjet as an advanced airbreathing ramjet. Scramjets are built to run cool and thereby to achieve near-orbital speeds. They were important during the Strategic Defense Initiative, when a set of these engines was to power the experimental X-30 as a major new launch vehicle. This effort fell short, but the X-43A, carrying a scramjet, has recently flown at Mach 9.65 by using a rocket. Atmospheric entry today is fully mature as an engineering discipline. Still, the Jupiter experience shows that work with its applications continues to reach for new achievements. Studies of scramjets, by contrast, still seek full success, in which such engines can accelerate a vehicle without the use of rockets. Hence, there is much to do in this area as well. For instance, work with computers may soon show just how good scramjets can become.

Facing the Heat Barrier: A History of Hypersonics PDF

Related Results : facing the heat barrier a history of hypersonics,