Home General Subjects Books Chemistry Books Fiesers’ Reagents For Organic Synthesis by Tse‐Lok Ho
Fiesers’ Reagents For Organic Synthesis 27th Volume by Tse‐Lok Ho :: This volume covers progress : This volume covers progress of synthe of synthetic organic methodologies for the period between the second half of 2011 and the end of 2012, also a few items of yester-years. The major advances have been refinements of reagent applications and expansion of the scope. Although ligands still figure prominently in affecting reactivities of transition metal ions, work aiming at finding ligand‐free reactions remains an honorable goal. Fruitful developments concerning oxidative coupling reactions that eschew halogen compounds are also in evidence. It is noted that burgeoning contributions to synthetic methodology are coming from Chinese chemists, perhaps reflecting societal changes from one of most populous nations. Or they are spiritually ingrained in the expostulation of the benevolent Han tribe leader, King Tang of the Shang Dynasty, who had a bath tub engraved to remind himself to refine his character while cleansing. 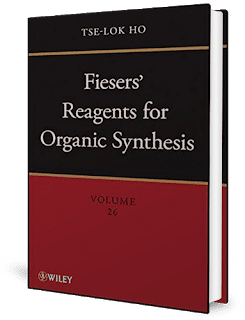 Acclaim for previous volumes of Fiesers

“Highly recommended . . . lots of succinct, practical information on recent developments . . . in a format that is easy to use. The reagents are taken up in alphabetical order (common usage names, not CAS indexing codenames), sometimes several to a page, sometimes several pages to a reagent. One can expect to find how to make the reagent (in loose terms), or where it can be bought, what it is good for, and where to seek complete details. As with previous volumes, one can profit from just browsing, even if one does not feel a need to look up any particular subject. It is thus a secondary function of the book to help one keep abreast of the field, and it would be a rare chemist who would not learn something new and useful from a casual perusal of the pages.”
—Journal of the American Chemical Society

This highly successful series has provided generations of professional chemists and students with a comprehensive, up-to-date examination of the reagent literature. Volume 27 surveys the most important synthetic methodologies published in 2010 and the first half of 2011. It continues to emphasize chiral catalysis and organocatalysis as well as catalytic reactions by derivatives of noble metals and reactions mediated by salts of copper, iron, and indium. Readers will also find extensive coverage of C-H bond activation by metal species.

Listed by common name, each entry features concise descriptions, information on preparing or buying the reagent, illustrations of chemical reactions, examples of applications, and references for further investigation.