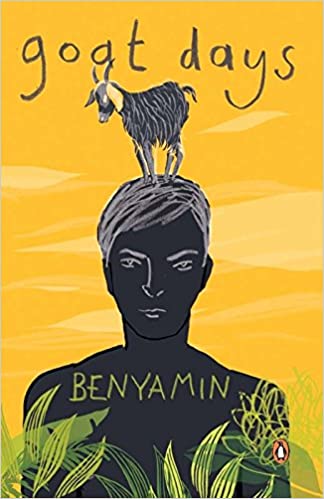 Goat Days is a 2008 Malayalam novel about an abused migrant worker in Saudi Arabia written by Bahrain-based Indian author Benyamin. The novel is based on real-life events and was a best seller in Kerala.

Najeeb s dearest wish is to work in the Gulf and earn enough money to send back home. He achieves his dream only to be propelled by a series of incidents, grim and absurd, into a slave-like existence herding goats in the middle of the Saudi desert. Memories of the lush, verdant landscape of his village and of his loving family haunt Najeeb whose only solace is the companionship of goats. In the end, the lonely young man contrives a hazardous scheme to escape his desert prison. Goat Days was published to acclaim in Malayalam and became a bestseller. One of the brilliant new talents of Malayalam literature, Benyamin s wry and tender telling transforms this strange and bitter comedy of Najeeb s life in the desert into a universal tale of loneliness and alienation.