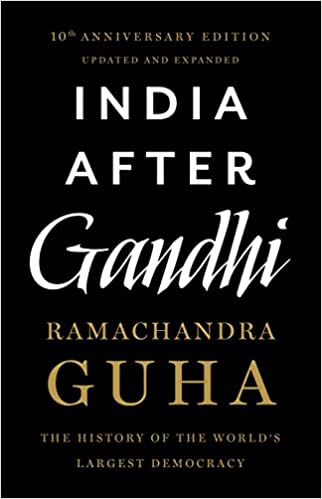 India After Gandhi By Ramchandra Guha

India after Gandhi: The History of the World’s Largest Democracy is a non-fiction book by Indian historian Ramchandra Guha first published by HarperCollins in August 2007. The book covers the history of the India after it gained independence from the British in 1947.

Ramachandra Guha’s India after Gandhi is a magisterial account of the pains, struggles, humiliations and glories of the world’s largest and least likely democracy. A riveting chronicle of the often brutal conflicts that have rocked a giant nation, and of the extraordinary individuals and institutions who held it together, it established itself as a classic when it was first published in 2007.

In the last decade, India has witnessed, among other things, two general elections; the fall of the Congress and the rise of Narendra Modi; a major anti-corruption movement; more violence against women, Dalits, and religious minorities; a wave of prosperity for some but the persistence of poverty for others; comparative peace in Nagaland but greater discontent in Kashmir than ever before. This tenth anniversary edition, revised and expanded, brings the narrative up to the present.