Home General Subjects Books Chemistry Books Indole Ring Synthesis From Natural Products to Drug Discovery by Gordon...
Indole Ring Synthesis From Natural Products to Drug Discovery by Gordon W. Gribble :: Given the enormous resurgence in indole ring synthesis over the past decade highlighted by the power of transition‐metal catalysis—there is a need for a comprehensive presentation of the myriad methods for constructing the indole ring: from the ancient to the modern and from the well‐known to the obscure. The organization that I have adopted follows that in my two earlier reviews on indole ring synthesis,1,2 beginning with an Introduction on the importance of indoles and their role in society. Given space limitations, with a few exceptions I do not explicitly cover the synthesis of indolines (2,3‐dihydroindoles), oxindoles (indolin‐2‐ones), indoxyls (indole‐3‐ols), isatins (indoline‐2,3‐diones), and azaindoles (pyrrolo[2,3‐x]pyridines). However, carbazoles, carbolines, and their fused ring derivatives are covered. 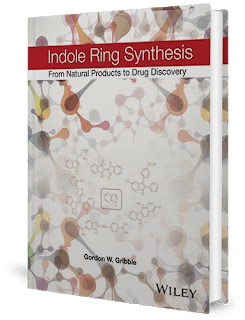