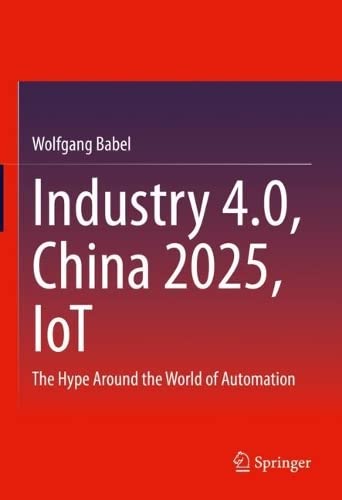 The book overviews automation technology over the last 50 years based on my own experiences. It is a good summary of automation since 1970 for all who want to know about the context of automation developments and their standards. It is a fundamental summary and enables the reader to experience the complex field of automation.
In particular, whether Industry 4.0, China 2025, IoT, and AI are revolutions or simply evolutions of time-tested available technologies in HW, SW, and algorithms is debated. Is the hype about Industry 4.0 justified or not?
In that context, a timeline since 1970 is shown for AI, ANN, essential milestones in automation, e.g., the OSI model, automation pyramid, standards for bus systems, main SW-languages, robots, AI, ANN, pattern recognition, Ethernet, the 12 most important international field buses, their main features and characteristics, the foundation of committees, harmonization and standardization efforts, OPC UA and cloud computing, field devices, PLCs, SCADA, MES, ERP, and automation history.
All of this history can be seen through the lens of the -controller, DSP (digital signal processor), FPGAs (field-programmable gate arrays), ASICs (application-specific integrated circuits), and Chip on Board. It includes the hardware history, from the Intel 8080 to octuple multicore processors. Similarly, the history of field devices from the laboratory to the field is depicted, including all of the difficulties and benefits associated with that transition. The issues are summarized in a pyramid of complexity. Requirements for robustness and safety are shown for field devices.
In the same way, the development of mainframes, workstations, and PCs is shown. SAP, a leading ERP system, is explained in more detail. It is specifically determined how SAP works and what must be considered when working with such a system.The differences between MES and ERP systems are discussed, especially for future combined SAP/MES systems.
The problems of middle-sized companies (SMEs) in dealing with Industry 4.0 and automation are explained.

Further examples are given and discussed for automated quality control in automobiles, PCB handling, and CIGS (solar cell) production. Also shown is the upgrade for older products to make them ready for automation standards. In detail, the history of modern robotics in the automotive industry is shown. We also discovered Industry 5.0 over the summer, which is becoming increasingly popular.

Industry 4.0, China 2025, IoT: The Hype Around the World of Automation