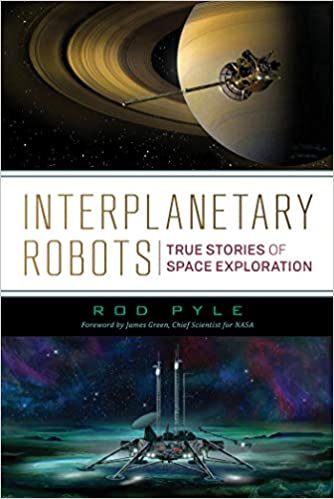 A NASA insider tells the exciting story of robotic space missions to explore the solar system.

Exploring the planets has been a goal of America’s space program since the dawn of the space race. This insider’s perspective examines incredible missions of robotic spacecraft to every corner of our solar system and beyond. Some were flown into glory, while others were planned and relegated to dusty filing cabinets. All were remarkable in their aspirations.

Award-winning science writer Rod Pyle profiles both the remarkable spacecraft and the amazing scientists and engineers who made them possible. From the earliest sprints past Venus and Mars to Voyager1‘s current explorations of the space between the stars, this exciting book sheds new light on ever-more ambitious journeys designed to increase the human reach into the solar system. Drawing on his perspective as a writer for NASA’s Jet Propulsion Laboratory, ground zero for NASA’s planetary exploration, the author further details plans now in development to look for signs of life on Jupiter’s moon Europa, submarines that will dive into the hazy hydrocarbon lakes of Saturn’s moon Titan, and intelligent spacecraft that will operate for months without human intervention on Mars and in the outer solar system well into the 2030s. Equally compelling are programs of exploration that were considered but never left the drawing board, such as automobile-sized biology laboratories designed for a Mars landing in the 1960s and plans to detonate atomic bombs on the moon.

Complemented by many rarely-seen photos and illustrations, these stories of incredible engineering achievements, daring imaginations, and technological genius will fascinate and inspire.