This book introduces the concepts of mobile and autonomous robotics to 3rd-4th grade students in computer science or related disciplines. This book covers principles of robot motion, forward and reverse kinematics of robotic arms and single-legged platforms, perception, error propagation, localization, and timing and classification. The cover image shows an intelligent inflatable toy that does not fall off the table using only a smart design and shows the importance of the process in designing an intelligent, autonomous system. This document is open source, open for contributions, and released under a Creative Commons license. 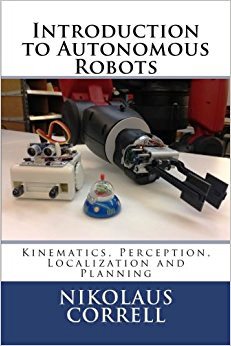 This book provides an algorithmic perspective on autonomous robotics for second-year students of linear algebra and probability theory. Robotics is an emerging field at the intersection of mechanical and electrical engineering with computer science. With more and more powerful computers, making robots intelligent is increasingly the focus and most difficult frontier of robotics research. Although there are a large number of textbooks on robotics and dynamics that cater to graduate students, those that provide a broad algorithmic perspective are almost exclusively limited to the graduate level. learn. Therefore, this book was developed not to create “another textbook, but better than others”, but to allow me to teach robotics to 3rd and 4th year students of the Faculty of Science. Computer Science at the University of Colorado.

Despite falling under “artificial intelligence”, standard AI techniques are not sufficient to solve problems involving uncertainty, such as the interaction of a robot in the real world. This book uses simple trigonometry to develop the kinematics equations of simple manipulators and mobile robots, and then introduces path planning, sensing, and thus uncertainty. . The problem of robot localization is introduced by formally introducing error propagation, leading to Markov localization, a particle filter, and finally an extended Kalman filter, with simultaneous localization and mapping.