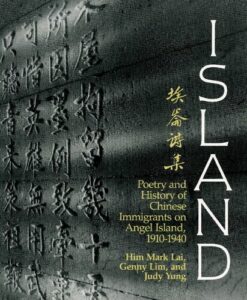 “For thirty years, from 1910 to 1940, Angel Island in San Francisco Bay was the first, often the only, toehold in America for immigrants from China. They sailed from the Cantonese Pearl River delta district of Taishan, fleeing famine and foreign concessions, bound for the Land of the Flowery Flag, the Golden Mountain. Some were relatives of earlier Chinese immigrants who had come to America for Sutter’s gold and stayed to help lay transcontinental railroad tracks. In their anxiety to get to America at whatever cost, others pretended to be relatives and arrived with identification papers bought in Canton and with ‘coaching papers,” carefully constructed and memorized family backgrounds that they hoped would pass them through immigration examiners. The Chinese Exclusion Act of 1882 had been relaxed somewhat under pressure from Chinese Government officials in Canton by 1910 when Angel Island was opened for Chinese immigrants only. But the immigration laws, so far as the Chinese were concerned, seemed designed to exclude rather than to admit. …

“During the time they spent on the island, as little as a few days, as long as three years, they carved, and ink brushed their concerns onto the walls of their barracks. One hundred thirty-five calligraphic poems survived, first discovered by a Federal park ranger after Angel Island was abandoned in 1940. These tell of voyages from China, detainment on the island, attitudes toward the first Americans encountered — immigration officials and social workers — and finally the disappointments and triumphs of the immigrants.”