Home General Subjects Books Chemistry Books Lange’s Handbook of Chemistry by John A. Dean
Lange’s Handbook of Chemistry, 15th Edition by John A. Dean :: Descriptive properties for a basic group of approximately 4300 organic compounds are compiled in Section 1, an increase of 300 entries. All entries are listed alphabetically according to the senior prefix of the name. The data for each organic compound include (where available) name, structural formula, formula weight, Beilstein reference (or if unavailable, the entry to the Merck Index, 12th ed.), density, refractive index, melting point, boiling point, flash point, and solubility (citing numerical values if known) in water and various common organic solvents. Structural formulas either too complex or too ambiguous to be rendered as line formulas are grouped at the bottom of each facing double page on which the entries appear. Alternative names, as well as trivial names of long-standing usage, are listed in their respective alphabetical order at the bottom of each double page in the regular alphabetical sequence. Another feature that assists the user in locating a desired entry is the empirical formula index.
Section 2 on General Information, Conversion Tables, and Mathematics has had the table on general conversion factors thoroughly reworked. Similarly the material on Statistics in Chemical Analysis has had its contents more than doubled. Descriptive properties for a basic group of inorganic compounds are compiled in Section 3, which has undergone a small increase in the number of entries. Many entries under the column “Solubility” supply the reader with precise quantities dissolved in a stated solvent and at a given temperature.
Several portions of Section 4, Properties of Atoms, Radicals, and Bonds, have been significantly enlarged. For example, the entries under “Ionization Energy of Molecular and Radical Species” now number 740 and have an additional column with the enthalpy of formation of the ions. Likewise, the table on “Electron Affinities of the Elements, Molecules, and Radicals” now contains about 225 entries. The Table of Nuclides has material on additional radionuclides, their radiations, and the neutron capture cross sections. Revised material for Section 5 includes the material on surface tension, viscosity, dielectric constant, and dipole moment for organic compounds. In order to include more data at several temperatures, the material has been divided into two separate tables. Material on surface tension and viscosity constitute the first table with 715 entries; included is the temperature range of the liquid phase. Material on dielectric constant and dipole moment constitute another table of 1220 entries. The additional data at two or more temperatures permit interpolation for intermediate temperatures and also permit limited extrapolation of the data. The Properties of Combustible Mixtures in Air has been revised and expanded to include over 450 compounds. Flash points are to be found in Section 1.
Completely revised are the tables on Thermal Conductivity for gases, liquids, and solids. Van derWaals’ constants for gases has been brought up to date and expanded to over 500 substances. Section 6, which includes Enthalpies and Gibbs Energies of Formation, Entropies, and Heat Capacities of Organic and Inorganic Compounds, and Heats of Melting, Vaporization, and Sublimation and Specific Heat at Various Temperatures for organic and inorganic compounds, has expanded by 11 pages, but the major additions have involved data in columns where it previously was absent. More material has also been included for critical temperature, critical pressure, and critical volume. 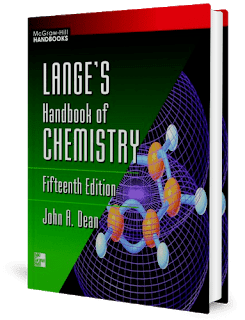 Lange’s Handbook of Chemistry, 15th Edition by John A. Dean