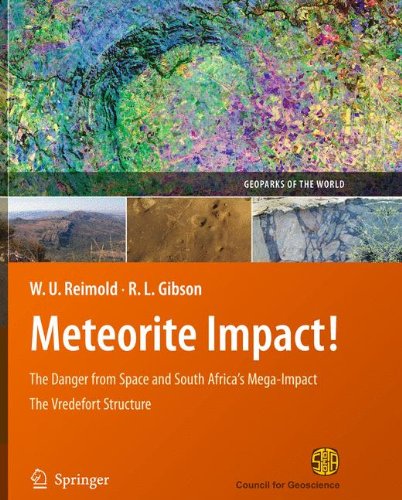 The impact of large extraterrestrial bodies (asteroids and comets) on Earth is an ever-present danger that humanity has only recently begun to recognize. Three giants stand out of the 175 impact craters found thus far on Earth: Chicxulub in Mexico, Sudbury in Canada, and the Vredefort Impact Structure in South Africa. Each of these impact events catastrophically altered the global environment and was strong enough to change life on our planet drastically. The Vredefort Structure is the oldest and most significant of these three giants. At about 300 km in diameter, it is near twice the size of the Chicxulub crater formed by an impact that wiped out approximately 75% of all known life on Earth 65 million years ago. In the more than 2000 million years since its formation, water, wind, and ice have slowly eroded the original Vredefort crater, exposing its roots in a series of spectacular rocks. The outcroppings in the region around the towns of Vredefort and Parys, known as the Vredefort Dome, show the scars of the explosive forces that accompanied the impact event. The rocks, ripped from the depths of the crust by the impact, also tell a far older story that stretches back to more than 3500 million years ago, when the first continents formed on the primitive Earth, and to the time when fabulous gold deposits accumulated on the margins of the ancient Witwatersrand sea. The Vredefort Structure is genuinely one of the geological wonders of the world. While the rocks of the Vredefort Dome and the story they have to tell a lie at the heart of this book, it is by no means the whole story. The Dome is an area of spectacular scenic beauty and biodiversity, dominated by a 40-kilometer-wide crescent of hills incised by the Vaal River and its tributaries. This area has also been home to humans for many thousands of years. The rich geological, biological, and archaeological heritage has led to the recognition of the most scenic part of the Vredefort Dome as a World Heritage Site.

Meteorite Impact! The Danger from Space and South Africa’s Mega-Impact The Vredefort Structure (Geoparks of the World)

Series: Geoparks of the World