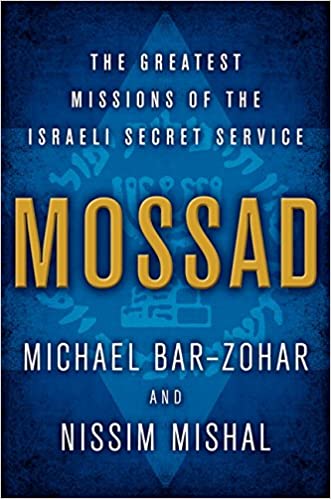 Mossad: The Greatest Missions of the Israeli Secret Service is history book about israel secret service mossad by Michael Bar-Zohar and Nissim Mishal, published in 2010.

The world of spies and intelligence services has always been behind the curtains away from the spotlight. The extent of their operations and whereabouts is a well-protected secret. The book, ‘Mossad: The Greatest Missions of the Israeli Secret Service’ reveals the dark world of intelligence agencies. The focus of the book is the Israeli Secret Service, Mossad. The book reveals various aspects of this secret service and talks about their daily activities. It is authored by Michael Bar-Zohar and is published by Ecco publications in 2012. The engaging narrative and breathtaking revelations make this book an interesting read.

Mossad is the Israeli Secret Service often regarded as one of the best in the world. Since its inception, this agency has been at the centre of various high risk missions that required brilliant planning and stunning diplomacy skills. Their work has defined the shape of Israel. The author through this book sheds light on some of the major operations conducted by Mossad and reveals facts that were hidden for a long time. The incidents recorded in this book include the demolition of the Syrian nuclear facility which possessed definite threat to Israel, the wiping out of Black September, capture of the famous and highly valued Adolf Eichmann. This book also discusses how Mossad dealt with the prominent Iranian nuclear scientists and the process through which they were removed for the safety of the nation.

Mossad : the greatest missions of the Israeli Secret Service PDF