Home Chemistry Books Analytical Chemistry Non-Relativistic QED Theory of the van der Waals Dispersion Interaction by...
Non-Relativistic QED Theory of the van der Waals Dispersion Interaction by Akbar Salam : Why it may reasonably be asked, write on the subject of dispersion forces and add to the already existing high-quality literature dealing with molecular QED theory? A complete answer to the question emerges after consideration of several diverse aspects. The dispersion interaction occurs between all material particles from the atomic scale upward and is a purely quantum mechanical phenomenon. Employing a quantised electromagnetic field–matter coupling approach allows for its rigorous calculation, along with an elementary understanding of the origin and manifestation of this fundamental interaction. Fluctuations of the ground state charge and current densities of the source and the vacuum field interact via the propagation of virtual photons—by definition unobservable quanta of light, resulting in an attractive force between atoms and molecules. The ubiquitous nature of the dispersion interaction means that it impacts a wide range of scientific disciplines and subareas. An opportunity therefore presents itself to bring the pioneering work of Casimir and Polder to an even broader audience, one who might ordinarily only be well versed with the London dispersion formula, by exposing them to the eponymous potential associated with the two aforementioned Dutch physicists, and the extension of their result to related applications involving contributions from higher multipole moment terms and/or coupling between three particles. This topic is also timely from the point of view that lately there has been renewed interest in a variety of van der Waals dominated processes, ranging from the physisorption of atoms and small molecules on semiconductor surfaces, to the hanging and climbing ability of geckos. These and many other problems continue to be studied experimentally and theoretically. In this second category, advances have occurred at both the microscopic and the macroscopic levels of description, frequently within the framework of QED. 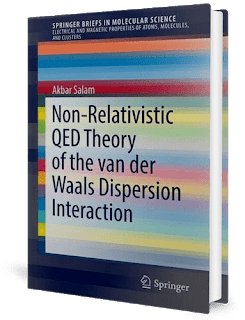