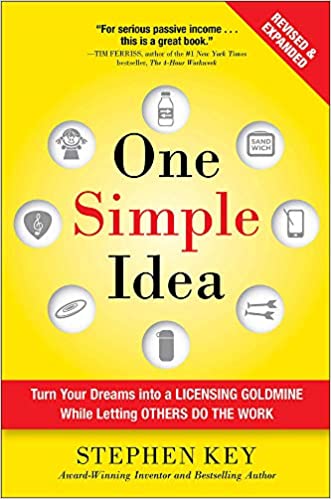 One Simple Idea By Stephen Key

One Simple Idea, Revised and Expanded Edition: Turn Your Dreams into a Licensing Goldmine While Letting Others Do the Work is is investing book by Stephen Key, published in 2011.

Stephen Key is an award-winning inventor who has licensed more than 20 product ideas. In 2011, he shared the secrets to his success in the bestselling book One Simple Idea. Since that time, many changes have occurred in the entrepreneurial world.

One Simple Idea, Revised and Expanded Edition has been revised and updated to reflect current trends and practices in the industry. In addition to teaching readers how to turn their ideas into marketable products that companies will want to license, Key expands upon his cutting-edge product development, sales, and negotiation strategies, making note of the new opportunities and technologies available to creative people today. The book also features real-life success stories from people who have used the author’s strategies.

Turn your one simple idea into millions—without lifting a finger! “Mr. Key’s brilliance, wisdom, and insight will make you rich. Buy this book!” —Mark Victor Hansen, bestselling author and co-creator of the Chicken Soup for the Soul® series “Stephen Key has written a book overflowing with the all-important information that inventors need: a step-by-step guide through everything that goes into a successful product introduction.” —Gary Dahl, Pet Rock® inventor “A terrific guide for anyone who wants to be a successful entrepreneur.” —John Osher, innovation guru who created SpinBrush®, Stretch Armstrong®, Spin Pop®, and Quattro® Titanium Trimmer Razor “Tired of working for corporate America? Tired of living paycheck to paycheck? One Simple Idea can teach you how to add a few zeros to your income. Buy this book and live your dreams now!” —Kevin Harrington, infomercial king and featured investor on Mark Burnett’s Shark Tank “Stephen Key turns conventional inventing ‘wisdom’ on its head and clearly outlines how anyone can earn a meaningful income with One Simple Idea.” —Tamara Monosoff, founder of Mom Invented® and author of The Mom Inventors Handbook and Your Million Dollar Dream “Whether you are a creator or a connector, this book will help you turn your ideas into a fulfilling, profitable career. Read it and WIN!” —Patrick Lonergan, former vice president and general manager, Johnson & Johnson, and president/partner of NUMARK Laboratories, Inc. About the Book: For as long as you can remember, you’ve had a dream. You’ve longed to see your product idea come to fruition so you never have to work for anyone else again. Stephen Key has been living this dream for 30 years. The developer of such lucrative products as Michael Jordan’s WallBall®, the Spinformation® rotating label, and HotPicks® guitar picks, he knows better than anyone how to make a great living as an entrepreneur. Key develops ideas for new products, licenses them out, collects royalty checks, and doesn’t look back. You can do it, too. All you need is One Simple Idea. In this book, Key reveals the secrets that helped him and thousands of his students—including bestselling author Tim Ferriss—turn their creativity into a passive income generator by “renting” an idea to a company, which takes care of R&D, production, marketing, sales, accounting, distribution, and everything else you don’t want to do. You’ll be amazed at how simple the process of licensing an idea for profit actually is. Key explains how to: Keep your ideas safe—without spending time and money on a patent Be your own boss—without formally opening a business See your product go to market—without footing a dime in expenses Make potentially big money—without quitting your day job The age-old business assumption that ideas must come from within organizations has been shattered. From global corporations to small businesses, companies have become so confident in outside entrepreneurs that licensing is now a $500 billion industry. Businesses need “freelancers” like Key—and you—to provide creative, marketable ideas for new offerings. With One Simple Idea, there’s no prototyping, no patents, and, best of all, no risk. You can make the system work for you—rather than the other way around.

One Simple Idea: Turn Your Dreams into a Licensing Goldmine While Letting Others Do the Work PDF