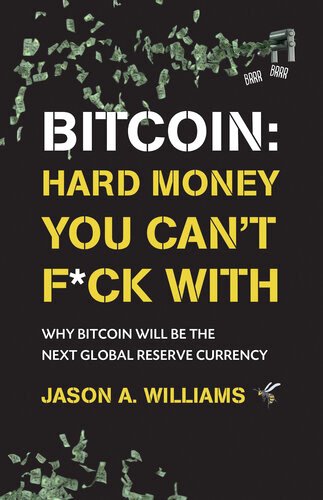 Bitcoin is hard money you can’t f–k with.

No one controls it. No governments, no companies, no central banks, no money printing. It’s a revolution as big as the internet. And it’s never been hacked.

Entrepreneur and investor Jason A. Williams is the first author to put bitcoin in context of the 2020 crisis – a year of financial disaster and unprecedented money creation (money printer go brrr!).

Not only was bitcoin the best-performing asset on the planet in 2020, it quietly established itself as the next global reserve currency as central banks around the world desperately printed their money into oblivion.

Hard Money You Can’t F*ck With explains bitcoin in simple, understandable terms and maps out how this “magic internet money” will grow into the best form of money we’ve ever had.

What bitcoin is
Who created it
Why bitcoin is “money you can’t f–k with”
How bitcoin emerged out of the 2008 banking crisis
Why money printing slowly destroys your wealth
Part 2: “A Brief History of Money (and Money Printing)”

Take a step back and learn “what exactly is money”
Why “printing cash” has always led to the death of currency
Why bitcoin is the best form of money ever created
Part 3: “How Bitcoin Becomes the Next Global Reserve Currency”

A deep dive into the 2020 financial crisis and how bitcoin emerged strongest
The emergence of national digital currencies to compete.
Why some nation states are now holding and trading in bitcoin

Bitcoin: Hard Money You Can’t F*ck With: Why bitcoin will be the next global reserve currency PDF