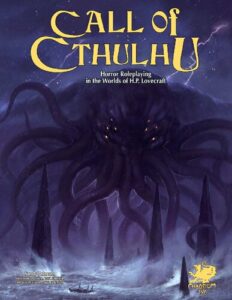 The story consists of three interconnected parts and is presented as notes belonging to Francis Thurston, a Boston resident investigating the ancient deity Cthulhu.

The first part, “The Horror in Clay,”  concerns a mysterious clay bas-relief depicting Cthulhu. Thurston finds the bas-relief among the belongings of his great-uncle, Professor Angell. The bas-relief was created by sculptor Henry Wilcox in March 1925 while half-asleep. At the time, Wilcox was haunted by mysterious visions of Cyclopean cities. Angell also discovered reports of residents—primarily artists, sculptors, architects, and others of a sensitive disposition—experiencing similar nightmares during that period. The following day, Wilcox was amazed by his creation and took it to Angell, who noted that the bas-relief was reminiscent of a figurine seized by police from members of a New Orleans religious sect in 1907.

In the third chapter, “The Madness from the Sea,”  Thurston continues his investigation. He learns of the Norwegian sailor Gustaf Johansen, the sole survivor of his crew, and finds manuscripts documenting his last voyage as second mate on board the schooner Emma. Emma veered off course during a storm and encountered the pirate yacht Alert. Although the crew was victorious against the pirates, they were forced to abandon the damaged Emma and transfer to the Alert. Johansen took command following the skirmish as the captain, and the first mate had perished. The sailors discovered a figurine of Cthulhu on the alert, which horrified and disgusted them. The sailors continued their course and landed on the uncharted island city of R’lyeh. Although they were terrified, they proceeded to explore out of curiosity. The geometry of the island was unfamiliar, and it was not even possible to tell exactly whether the land and sea were parallel.

The sailors approached a massive door that appeared to be not quite vertical. When they accidentally opened it, Cthulhu emerged, awakening from a dream. Two of the eight sailors died on the spot from fright. Cthulhu grabbed three more with his paw and swallowed them. As the other three fled, one hit the corner of a building and seemed to be sucked in. The remaining two managed to reach the yacht, but one of the sailors lost his mind from the horror he experienced and died a few days later. The only one who escaped with his life and mind, Johansen, started the yacht but realized there was insufficient time to pick up speed. Johansen turned the yacht around and rammed Cthulhu. By the time Cthulhu began to recover, the yacht had already sailed to a safe distance. A few days later, R’lyeh submerged back into the ocean, and the nightmares that had plagued humanity ceased.

After learning that Johansen died under unknown circumstances, Thurston speculates that Angell died at the hands of Cthulhu’s cult. He then fears that he has become the cult’s new target, as he has learned too much, and he attempts to keep his mind off of Cthulhu’s next appearance.

Of Keys & Gates: The Resurrected, Vol. II (Call of Cthulhu)

The Unspeakable Oath #11 – Call of Cthulhu