Home A Special Books If I Had Your Face Book

If I Had Your Face Book PDF 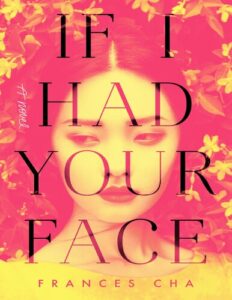 “Powerful and provocative . . . a novel about female strength, spirit, resilience—and the solace that friendship can sometimes provide.”—The Washington Post

Kyuri is a beautiful woman with a hard-won job at a Seoul “room salon,” an exclusive underground bar where she entertains businessmen while they drink. Though she prides herself on her cold, clear-eyed approach to life, an impulsive mistake threatens her livelihood.

Kyuri’s roommate, Miho, is a talented artist who grew up in an orphanage but won a scholarship to study art in New York. Returning to Korea after college, she finds herself in a precarious relationship with the heir to one of the country’s biggest conglomerates.

Down the hall in their building lives Ara, a hairstylist whose two preoccupations sustain her: an obsession with a boy-band pop star and a best friend who is saving up for the extreme plastic surgery that she hopes will change her life.

And Wonna, one floor below, is a newlywed trying to have a baby that she and her husband have no idea how they can afford to raise in Korea’s brutal economy.

Together, their stories tell a gripping, unfamiliar, and unmistakably universal tale, in which their tentative friendships may be the thing that ultimately saves them.

“The chapters alternate among the women, each one breathing new life into the old chestnut, ‘You never know what goes on behind closed doors.’ . . . Take a closer look, and you’ll find the sisterhood at the heart of this ambitious book. It’s the scaffolding—and also, occasionally, the wrecking ball.”—The New York Times Book Review.

“[Cha] has a biting wit and an eye for absurd glitz. . . . Ultimately, female friendship bolsters precarious fortunes in this gripping novel—compelling readers to consider what remains after beauty fades.”—O: The Oprah Magazine

“An enthralling tale about the weight of old traumas, economic disparity and the restoring power of friendship . . . [A] powerful debut.”—People

“If I Had Your Face isn’t just a good book—it’s a book we need badly. . . . The vivid characters at the novel’s core make for a compelling read, and in a time of such global division, hopefully, a uniting one. . . . If you read one book this month, make it If I Had Your Face.”—InStyle

“[A] powerful and provocative rendering of contemporary South Korean society, one that might be considered bleak if not for the women themselves, who occasionally surprise with their compassion and bravery. At heart, If I Had Your Face is a novel about female strength, spirit, resilience—and the solace that friendship can sometimes provide.”—The Washington Post.

“Searing . . . Essential reading in what Jia Tolentino memorably called the age of the Instagram face.”—Vogue (UK)

“Make way for Frances Cha, a fascinating new voice who guides us into the complexities and contradictions of modern-day Seoul, a dissonant, neon world ripped open to bare the same universal and human challenges that face us all. I devoured this novel in a single sitting.”—Janice Y. K. Lee, New York Times bestselling author of The Piano Teacher.

“Few American novelists know Seoul the way Frances Cha does, and in her intimate, panoramic debut, she brings that stunning city to life. There are voices here you haven’t heard before. . . . An enthralling read from the very first page.”—Ed Park, author of Personal Days

Frances Cha is a former travel and culture editor for CNN in Seoul. She grew up in the United States, Hong Kong, and South Korea. A graduate of Dartmouth College and the Columbia University MFA writing program, she has written for The Atlantic, The Believer, and the Yonhap News Agency, among others. She has lectured at Columbia University, Ewha Woman’s University, Seoul National University, and Yonsei University. She lives in Brooklyn.