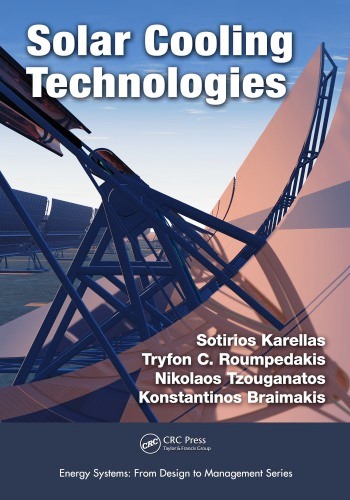 He has more than 100 relevant publications in scientific journals and conferences and is currently supervising six Ph.D. students at NTUA working in the field of energy production/conversion.

He has participated in numerous projects at NTUA (2006–present) and at Technische Universität München (2001–2006), assuming both technical and coordination responsibilities.

He is currently pursuing a second master’s degree in Mechanical Engineering with a specialization in Sustainable Processes and Energy Technologies at Technische Universiteit (TU) Delft, Netherlands.

During 2014–2015, he worked in the Laboratory of Steam Boilers and Thermal Plants at the National Technical University of Athens as a research engineer.

He continues to collaborate with the lab as a project engineer in projects relevant to his specialization. His main fields of expertise are organic Rankine cycle and refrigeration technologies.

Nikolaos Tzouganatos earned his MEng degree from the Department of Mechanical Engineering at the National Technical University of Athens in 2010 and his MSc degree in Energy Science & Technology from ETH Zurich in 2012.

In 2016, he earned his Ph.D. from the Department of Mechanical and Process Engineering of ETH Zurich.

He performed his doctoral research at the Solar Technology Laboratory of the Paul Scherrer Institute, Switzerland, in the field of solar thermochemistry and, particularly, on solar reactor development for zinc recycling and other metallurgical processes.

Part of his work has been performed in close collaboration with the Commonwealth Scientific & Industrial Research Organisation (CSIRO) during his research visit at the National Solar Energy Centre in Newcastle, Australia in 2014.

After working as a Postdoctoral Research Associate at the Professorship of Renewable Energy Carriers of ETH Zurich on the development of a parabolic dish solar collector-reactor system for the production of syngas by the simultaneous splitting of H2O and CO2 via ceria redox reactions,

He was appointed Project Leader at the Strategic Asset Management Department of the Zurich Municipal Electric Utility (new) in May 2017.

Konstantinos Braimakis is currently a Ph.D. student at the Laboratory of Steam Boilers and Thermal Plants at the School of Mechanical Engineering of the National Technical University of Athens, Greece, in which he earned his diploma in 2013.

His main focus is the exergy analysis as well as the thermodynamic and thermoeconomic optimization of Organic Rankine applications for cogeneration and trigeneration, heat transfer analysis, and the investigation of zeotropic mixture working fluids.

The growing need for renewable energy deployment due to the depletion of fossil fuel reserves and the increasing global concerns regarding the environmental impact of conventional methods of energy make the augmented integration of solar energy into the energy mix a top priority.

Up until the last few years, most of the relevant research and development endeavors, as well as energy policy directions, have aimed at the use of renewable energy sources for electricity generation and heating, which ultimately resulted in the installation of many systems worldwide, covering a wide range of applications.

Cooling, on the contrary, is still primarily based on conventional methods reliant on fossil-fuel-derived electricity.

Given that most of the existing refrigeration technologies have already been widely investigated and optimized, researchers have turned their interest on the utilization of renewable energy sources as a primary energy input to either produce the electricity required by refrigeration systems or entirely substitute it.

In this context, solar energy technologies presumably represent the most promising candidate for providing renewable electricity and heat for driving sustainable heating and cooling systems.

Solar-driven cooling applications are especially attractive as a means for peak electricity load shaving, due to the diurnal coincidence of the maximum solar radiation intensity with the peak cooling demand in buildings.

This concurrence between solar availability and the peak building demands turns the solar cooling and heating applications into the dominant sustainable option and a field of great scientific interest.

Solar cooling systems make use of a collector system to capture and transform solar radiation into electricity or useful heat, which is used to drive a refrigeration unit.

It is a rather modern technology since, for the time being, there are not many installed applications worldwide. However, taking into account the total surface of solar collectors that have been globally installed for heating, it is easy to appreciate the great potential and opportunities of extending their use for the additional production of cooling.

The ongoing development of solar collector systems and cooling installations is expected to lead to a substantial reduction of the high investment costs of the technology, which are at the moment one of its main barriers.

This book provides a detailed theoretical and technical overview of the available schemes and conversion pathways for the implementation and optimization of solar cooling technologies.

After covering each technology separately, a comparison including basic process economics is held to enable the reader to better understand the advantages and weaknesses of each option and gain insights into their special characteristics and applicability.