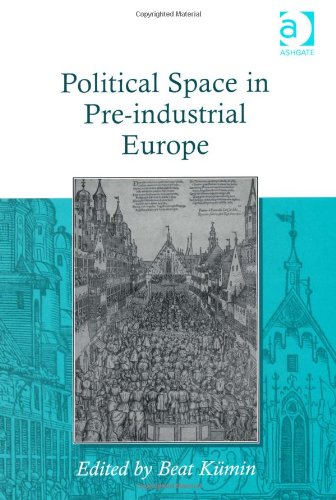 Recently, social and cultural studies have experienced a “spatial turn.” Space-related research seems to be expanding more: some historians relate macroeconomics and human agency to regional contexts; others focus on micro-spaces like houses, taverns, and parish churches; even virtual or imaginary spaces (such as Purgatory) attract increasing attention. In all these works, space emerges as a social construct rather than a mere physical unit. This collection examines the potential and limitations of spatial approaches for the political history of preindustrial Europe. Adopting a broad definition of “political,” the volume concentrates on two key questions: Where did the political exchange take place? And how did spatial dimensions affect political life in different periods and contexts? Taken together, the essays demonstrate that premodern Europeans made use of a much wider range of political sites than is usually assumed—not just princely courts, town halls, and representative assemblies, but common fields as well as back rooms of provincial inns—and that spatial dimensions provided key variables in political life, both in terms of the embedding of practical governance and in the more abstract sense of patronage networks, conceptualizations of power, and territorial ambitions. As such, this book offers a timely and critical engagement with the “spatial turn” from a political perspective. Focusing on the distinct constitutional environments of England and the Holy Roman Empire—one associated with early centralization and strong parliamentary powers, the other with political fragmentation and absolutist tendencies—it bridges the usual gaps between late medievalists and early modernists and those between historians and scholars from other disciplines. The preface, commentary, and a sketch of research perspectives discuss the broader implications of the papers’ findings and reflect upon the potential and limits of spatial approaches for political history as a whole.

Contents……Page 6
List of Figures and Table……Page 8
Notes on Contributors……Page 10
Acknowledgments……Page 14
Preface……Page 16
Introduction……Page 20
Part I: Political Sites……Page 32
1 Representing Political Space at a Political Site: The Imperial Diets of the Sixteenth Century……Page 34
2 The Princely Court and Political Space in Early Modern Europe……Page 58
3 Drinking Houses and the Politics of Surveillance in Pre-industrial Southampton……Page 76
4 Politics, Clubs and Social Space in Pre-industrial Europe……Page 96
5 Political Spaces and Parliamentary Enclosure in an Upland Context: Cumbria c.1760–1840……Page 110
Part II: Spatial Politics……Page 130
6 Political and Geographical Space: The Geopolitics of Medieval England……Page 132
7 Social Space and Urban Conflict: Unrest in the German Imperial City of Esslingen am Neckar……Page 150
8 The Spatial Dynamics of Parish Politics: Topographies of Tension in English Communities, c.1350–1640……Page 166
9 Petitioning Places and the Credibility of Opinion in the Public Sphere in Seventeenth-Century England……Page 190
10 Which Switzerland? Contrasting Conceptions of the Early Modern Swiss Confederation in European Minds and Maps……Page 212
11 Outwitting Power: Bogus Kings and Officials in Early Modern England……Page 230
Part III: Outlook……Page 246
12 Comment from a Historical Perspective……Page 248
13 Spaces in Theory, Spaces in History and Spatial Historiographies……Page 264
Index……Page 282