Principles of Inorganic Chemistry by Brian W. Pfennig :: Review: This book was written as a result of the perceived need of mine and several other colleagues for a more advanced physical inorganic text with a strong emphasis on group theory and its applications. Many of the inorganic textbooks on the market are either disjointed—with one chapter completely unrelated to the next—or encyclopedic, so that the student of inorganic chemistry is left to wonder if the only way to master the field is to memorize a large body of facts. While there is certainly some merit to a descriptive approach, this text will focus on a more principles-based pedagogy, teaching students how to rationalize the structure and reactivity of inorganic compounds—rather than relying on rote memorization. After many years of teaching the inorganic course without a suitable text, I decided to write my own. Beginning in the summer of 2006, I drew on a variety of different sources and tried to pull together bits and pieces from different texts and reference books, finishing a first draft (containing 10 chapters) in August, 2007. I used this version of the text as supplementary reading for a few years before taking up the task of writing again in earnest in 2012, subdividing and expanding the upon original 10 chapters to the current 19, adding references and more colorful illustrations, and including problems at the ends of each chapter. The book was written with my students in mind. I am a teacher first and a scientist second. I make no claims about my limited knowledge of this incredibly expansive field. My main contribution has been to collect material from various sources and to organize and present it in a pedagogically coherent manner so that my students can understand and appreciate the principles underlying such a diverse and interesting subject as inorganic chemistry.

The book is organized in a logical progression. Chapter 1 provides a basic introduction to the composition of matter and the experiments that led to the development of the periodic table. Chapter 2 then examines the structure and reactivity of the nucleus. Chapter 3 follows with a basic primer on wave-particle duality and some of the fundamentals of quantum mechanics. Chapter 4 discusses the solutions to the Schrödinger equation for the hydrogen atom, the Pauli principle, the shapes of the orbitals, polyelectronic wave functions, shielding, and the quantum mechanical basis for the underlying structure of the periodic table. Chapter 5 concludes this section of the text by examining the various periodic trends that influence the physical and chemical properties of the elements. Chapter 6 then begins a series of chapters relating to chemical bonding by reviewing the basics of Lewis structures, resonance, and formal charge. Chapter 7 is devoted to the molecular geometries of molecules and includes not only a more extensive treatment of the VSEPR model than most other textbooks but it also presents the ligand close-packing model as a complementary model for the prediction of molecular geometries. Symmetry and group theory are introduced in detail in Chapter 8 and will reappear as a recurring theme throughout the remainder of the text. Unlike most inorganic textbooks on the market, ample coverage is given to representations of groups, reducing representations, direct products, the projection operator, and applications of group theory. Chapter 9 focuses on one of the applications of group theory to the vibrational spectroscopy of molecules, showing how symmetry coordinates can be used to approximate the normal modes of vibration of small molecules. The selection rules for IR and Raman spectroscopy are discussed and the chapter closes with a brief introduction to resonance Raman spectroscopy. The next three chapters focus on the three different types of chemical bonding: covalent, metallic, and ionic bonding. Chapter 10 examines the valence bond and molecular orbital models, which expands upon the application of group theory to chemical problems. Chapter 11 then delves into metallic bonding, beginning with a primer on crystallography before exploring the free electron model and band theory of solids. Chapter 12 is focused on ionic bonding—lattice enthalpies, the Born–Haber cycle, and Pauling’s rules for the rationalization of ionic solids. It also has extensive coverage of the silicates and zeolites. The structure of solids is reviewed in greater detail in Chapter 13, which explores the interface between the different types of chemical bonding in both solids and discrete molecules. Switching gears for a while from structure and bonding to chemical reactivity, Chapter 14 introduces the two major types of chemical reactions: acid–base reactions and oxidation–reduction reactions. In addition to the usual coverage of hard–soft acid–base theory, this chapter also examines a more general overview of chemical reactivity that is based on the different topologies of the MOs involved in chemical transformations. This chapter also serves as a bridge to the transition metals. Chapter 15 presents an introduction to coordination compounds and their thermodynamic and magnetic properties. Chapter 16 examines the structure, bonding, and electronic spectroscopy of coordination compounds, making extensive use of group theory. Chapter 17 investigates the reactions of coordination compounds in detail, including a section on inorganic photochemistry. Finally, the text closes with two chapters on organometallic chemistry: Chapter 18 looks at the different types of bonding in organometallics from an MO point of view, while Chapter 19 presents of a survey of organometallic reaction mechanisms, catalysis, and organometallic photochemistry and then concludes with connections to main group chemistry using the isolobal analogy. Throughout the textbook, there is a continual building on earlier material, especially as it relates to group theory and MOT, which serve as the underlying themes for the majority of the book. 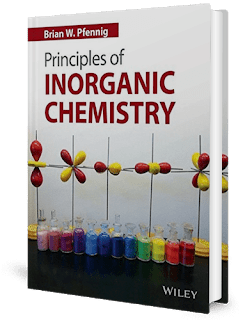