Principles of Quantum Mechanics as Applied to Chemistry and Chemical Physics by Donald D. Fitts 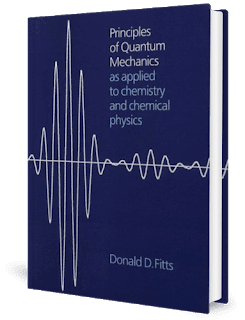 Quantum behavior encompasses a large fraction of modern science and technology, including the laws of chemistry and the properties of crystals, semiconductors, and superfluids. This graduate-level text presents the basic principles of quantum mechanics using modern mathematical techniques and theoretical concepts, such as hermitian operators, Hilbert space, Dirac notation, and ladder operators. The first two chapters serve as an introduction to quantum theory with a discussion of wave motion and Schrödinger’s wave mechanics. Coverage then details the fundamental principles of quantum mechanics. Throughout, basic theory is clearly illustrated and applied to the harmonic oscillator, angular momentum, the hydrogen atom, the variation method, perturbation theory, and nuclear motion. This volume is the ideal textbook for beginning graduate students in chemistry, chemical physics, molecular physics and materials science.

Principles of quantum mechanics as applied to chemistry and chemical physics