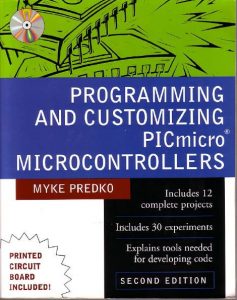 Programming And Customizing PIC Microcontrollers, by Myke Predko, is probably the best book out there for someone who is starting out with the PIC series of microcontrollers from Microchip. I used Myke’s book as both a tutorial and reference when I created my PIC RGB Video Display. Since then, I have referred back to this book countless times even when working with other microcontrollers, like Atmel’s AVR family, because it contains so much useful architecture-independent technical information. I have referred to this book for information about topics including LCD interfacing, debouncing switches, RS-232 serial interfaces, and multiplexed LED drivers. As a technical reference it easily surpasses the majority of AVR books that are out there.

The book is starting to show it’s age by not including some of the latest PIC micros in the examples (like the PIC16F628), but the code is easily ported to newer/faster/better microcontrollers, a good learning excercise in itself.

GET PAPER BOOK :Programming and Customizing the Multicore Propeller Microcontroller: The Official Guide