Home Engineering Books Mechanical Books Quantum Mechanics for Scientists and Engineers by David A. B. Miller 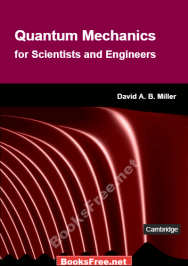