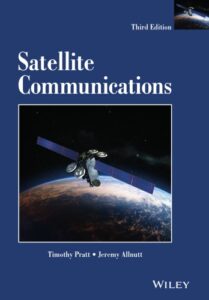 Extensive revision of the best-selling text on satellite communications ― includes new chapters on CubeSats, NGSO satellite systems, and Internet access by satellite. There have been many changes in the thirty-three years since the first edition of Satellite Communications was published. There has been a complete transition from analog to digital communication systems, with analog techniques replaced by digital modulation and digital signal processing. While the distribution of television programming remains the largest sector of commercial satellite communications, low earth orbit constellations of satellites for Internet access are set to challenge that dominance. In the third edition, chapters one through three cover topics specific to satellites, including orbits, launchers, and spacecraft. Chapters four through seven covers the principles of digital communication systems, radio frequency communications, digital modulation, multiple access techniques, and propagation in the earth’s atmosphere, topics that are common to all radio communication systems. Chapters eight through twelve cover applications that include non-geostationary satellite systems, low throughput systems, direct broadcast satellite television, Internet access by satellite, and global navigation satellite systems. The chapter on Internet access by satellite is new to the third edition, and each of the chapters has been extensively revised to include the many changes in the field since the publication of the second edition in 2003. Two appendices have been added that cover the digital transmission of analog signals and antennas. An invaluable resource for students and professionals alike, this book:

Globalization of Mobile and Wireless Communications