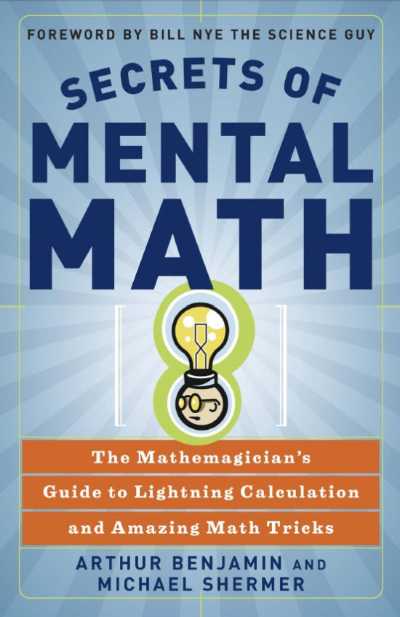 Secrets of Mental Math by Benjamin and Michael Shermer

I like to think about the first humans, the people who came up with the idea to count things. They must have noticed right away that figuring on your fingertips works great.

Perhaps Og (a typical ancient cave guy) or one of his pals or associates said, “There are one, two, three, four, five of us here, so we need five pieces of fruit.” Later, “Hey, look,” someone must have said (or grunted), “you can count the number of people at the campfire, the number of birds on a tree, stones in a row, logs for a fire, or grapes in a bunch, just with your fingers.”

Well, it’s true. The more we understand the universe, the more we discover its mathematical connections. Flowers have spirals that line up with a special sequence of numbers (called Fibonacci numbers) that you can understand and generate yourself.

Seashells form in perfect mathematical curves (logarithmic spirals) that come from a chemical balance. Star clusters tug on one another in a mathematical dance that we can observe and understand from millions and even billions of kilometers away.

We have spent centuries discovering the mathematical nature of Nature. With each discovery, someone had to go through the math and make sure the numbers were right. Well, Secrets of Mental Math can help you handle all kinds of numbers.

You’ll get comfortable with calculations in a way that will let you know some of Nature’s numerical secrets, and who knows where that might take you? As you get to know numbers, the answer really is at your fingertips.

That’s not a joke, because that’s where it all begins. Almost everyone has ten fingers, so our system of mathematics started at 1 and went to 10. In fact, we call both our numbers and our fingers “digits.” Coincidence? Hardly. Pretty soon, though, our ancestors ran out of fingers.

The same thing has probably happened to you. But we can’t just ignore those big numbers and (this is a joke) throw up our hands. We need numbers they’re part of our lives every day, and in ways, we typically don’t even notice.

Think about a conversation you had with a friend. To call, you needed a phone number, and the time you spent on the phone was measured in a number of hours and minutes. Every date in history, including an important one like your birthday, is reckoned with numbers.

We even use numbers to represent ideas that have nothing to do with counting. What’s your 20? (I.e., Where are you? From the old police “10” codes, like 10-4 for “yes.”) What’s the 411 on that gal? (I.e., What’s her background; is she dating anyone? From the number for telephone information.) People describe one another in numbers representing height and weight.

And, of course, we all like to know how much money we have or how much something costs in numbers: dollars, pesos, yuan, rupees, krona, euros, or yen. Additionally (another joke), this book has a time-saving section on remembering numbers—and large numbers of numbers.

If, for some reason, you’re not crazy about math, read a little further. Of course I, as the Science Guy, hope you do like math. Well, actually, I hope you love math.

But no matter how you feel about math, hatred or love, I’d bet that you often find yourself just wanting to know the answer right away, without having to write down everything carefully and work slowly and diligently—or without even having to stop and grab a calculator.

You want the answer, as we say, “as if by magic.” It turns out that you can solve or work many, many math problems almost magically. This book will show you how.

What makes any kind of magic so intriguing and fun are that the audience seldom knows how the trick is performed. “How did she do that . . . ?” “I don’t know, but it’s cool.”

If you have an audience, the tricks and shortcuts in Secrets of Mental Math are a lot like magic. The audience seldom knows how a trick is performed; they just appreciate it. Notice, though, that in magic, it’s hardly worth doing if no one is watching.

But with Secrets, knowing how it works doesn’t subtract from the fun (or pun). When arithmetic is easy, you don’t get bogged down in the calculating; you can concentrate on the wonderful nature of numbers. After all, math runs the universe.

Dr. Benjamin got into this business of lightning-fast calculating just for fun. We have to figure he impressed his teachers and classmates. Magicians might make some in their audience think that they have supernatural powers.

Mathemagicians, at first, give the impression that they’re geniuses. Getting people to notice what you’re doing is an old part of sharing ideas.

If they’re impressed, they’ll probably listen to what you have to say. So try some “mathematics.” You may impress your friends, all right. But you’ll also find yourself performing just for yourself.

You’ll find you’re able to do problems that you didn’t think you could. You’ll be impressed . . . with yourself. Now, counting on your fingers is one thing (one finger’s worth).

But have you ever found yourself counting out loud or whispering or making other sounds while you calculate? It almost always makes math easier. The problem, though, is that other people think you’re a little odd . . . not even (more math humor).

Well, in Secrets of Mental Math, Dr. Benjamin helps you learn to use that “out-loud” feature of the way your brain works to do math problems more easily, faster, and more accurately (which is surprising), all while your brain is thinking away almost as if you’re thinking out loud. You’ll learn to move through math problems the same way we read in English, left to right.

You’ll learn to handle big problems fast with good guesses, actually great guesses, within a percent or so. You will learn to do arithmetic fast; that way you can spend your time thinking about what the numbers mean.

Og wondered, “Do we have enough fruit for each person sitting around the fire? If not, there might be trouble.”

Now you might wonder, “Is there enough space on this computer to keep track of my music files . . . or my bank account? If not, there might be trouble.”

But, it’s really something to be able to figure that the United States had its first big Fourth of July on a Thursday in 1776. April 15, 1912, the day the Titanic sank, was a Monday.

The first human to walk on the moon set foot there on July 20, 1969, a Sunday. You’ll probably never forget that the United States was attacked by terrorists on September 11, 2001. With Secrets of Mental Math, you’ll always be able to show it was a Tuesday.

There are relationships in Nature that numbers describe better than any other way we know. There are simple numbers that you can count on your hands: one, two, three, and on up. But there is also an infinite number of numbers in between. There are fractions.

There are numbers that never end. They get as big as you want and so small that they’re hard to imagine. You can know them.

With Secrets of Mental Math, you can have even these in-between numbers come so quickly to your mind that you’ll have a bit more space in your brain to think about why our world works this way. One way or another, this book will help you see that in Nature, it all adds up.

Download Secrets of Mental Math by Benjamin and Michael Shermer in PDF Format For Free.