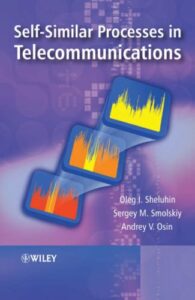 For the first time, the problems of voice services self-similarity are discussed systematically and in detail with specific examples and illustrations. Self-Similar Processes in Telecommunications consider the self-similar (fractal and multifractal) models of telecommunication traffic and efficiency based on the assumption that its traffic has fractal or multifractal properties (is self-similar). The theoretical aspects of the most well-known traffic models demonstrating self-similar properties are discussed in detail, and the comparative analysis of the different models’ efficiency for self-similar traffic is presented. This book demonstrates how to use self-similar processes for designing new telecommunications systems and optimizing existing networks so as to achieve maximum efficiency and serviceability. The approach is rooted in theory, describing the algorithms (the logical arithmetical or computational procedures that define how a task is performed) for modeling these self-similar processes. However, the language and ideas are essentially accessible for those who have a general knowledge of the subject area, and the advice is highly practical: all models, problems, and solutions are illustrated throughout using numerous real-world examples. * Adopts a detailed, theoretical, yet broad-based and practical mathematical approach for designing and operating numerous types of telecommunications systems and networks so as to achieve maximum efficiency * Places the subject in context, describing the current algorithms that make up the fractal or self-similar processes while pointing to the future development of the technology * Offers a comparative analysis of the different types of self-similar process used within the context of local area networks, wide area networks and in the modeling of video traffic and mobile communications networks * Describes how mathematical models are used as a basis for building numerous types of network, including voice, audio, data, video, multimedia services and IP (Internet Protocol) telephony The book will appeal to the wide range of specialists dealing with the design and exploitation of telecommunication systems. It will be useful for post-graduate students, lecturers, and researchers connected with communication network disciplines.