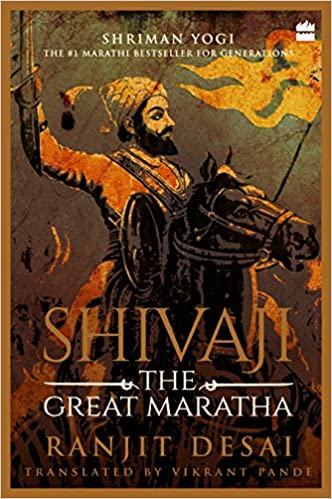 Shivaji: The Great Maratha By Ranjit Desai and Vikrant Pande

Shivaji: The Great Maratha is biography of of greatest maratha warrior Chhatrapati Shivaji Maharaj by Ranjit Desai and Vikrant Pande.

‘The epic text of Ranjit Desai’s Shriman Yogi finds new voice in Vikrant Pande’s nuanced translation, an immersive narrative of the foundations of the Maratha empire and the saga of its charismatic founder.’ – Namita Gokhale. Young Shivaji reaches Pune, a dying fort city, with his mother Jijabai and lights the first lamp within its ruins. While his father Shahaji Bhosle is away on deputation by the Adil Shah sultanate after having failed in a revolt against it, Shivaji learns how an empire is built from the ground up. Thus begins the life of the Great Maratha. What awaits Shivaji is nothing short of the vast scroll of history, and it takes him from Surat to Thanjavur and all the way to Aurangzeb’s durbar in Agra. He dreams of freeing his land from the clutches of Mughal rule, and though he suffers many defeats and personal losses along the way he never gives up his vision of Hindavi Swaraj. Amidst political intrigue and a chain of skirmishes, Shivaji becomes a leader, a warrior and a tactician par excellence, driven by immense pride and love for his motherland.