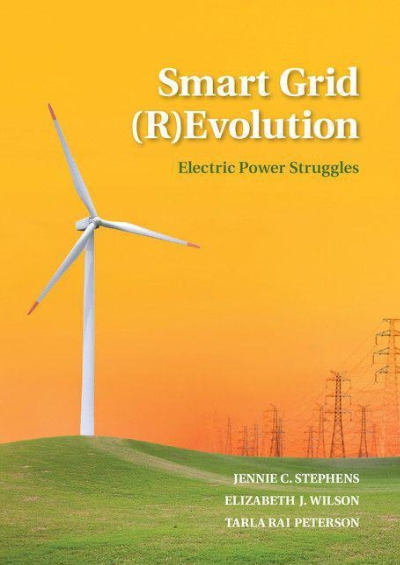 What makes a book worth reading? Has it a theme, a topic of importance that matters? Perhaps we can use it as a tool, to do good things?

Can it take us on a journey to new worlds? Will it stretch our minds and challenge the old thoughts in them? This book, Smart Grid (R)evolution, offers value by each of those measures.

smarter decisions about which power-plants to turn on and off,

smarter decisions about which transmission lines to open and close,

and smarter ways to show customers how their acts affect operations and costs:

in short, a smarter grid.

This book looks from several angles at the promises and pitfalls that lie between the grid systems of ‘today’ and the emergence of that smarter grid.

Is this book a tool? Yes; it’s a multi-task, swiss-army-knife, kind of tool, with tips for readers on everything from listening to customers, to looking at data across-the-board, to balancing the pace of infrastructure investments among retail, wholesale, and operational installations and practices.

Is it a journey? Yes; this story takes us from the sea-flooded subways of New York to the mountains of Boulder, to Austin in the Texas plain, and to the North Sea cliffs of Bornholm.

Around the world, the book shows us the early seeds and the emerging shoots of a radically new system. It is a journey over time as well as over miles, and from mind to mind, from group to group. It treats, with respect, the hopes of many and the concerns of others.

So we are led to both promises and fears, with a calm and reasoned summary of each. In Emily Dickinson’s words, the authors tell the truth but tell it to slant,” looking at reality and dreams from multiple angles.

In their own analogy, they see disparate groups, each like the blind men touching different portions of an elephant, and they try to move us, together, past those unconnected and disparate views.

Thus, they tell the emerging story of smart grid systems from multiple perspectives, with real respect for differing views, but without abandoning the authors’ own judgments.

Do the stories and the analyses stretch our minds and challenge our old thoughts? Speaking for myself, I’ve spent three decades nurturing technology change, worrying about climate change, overseeing electric system operations, and searching for positive value from disputes as I judged and resolved contested cases about new policies.

With that basis – or despite it!  I saw new things here, shifted my weighing of some risk assessments, opened my eyes to the emotions of people with whom I might disagree on policy judgments, and widened my sense of the possible in our future.

I have to think that any serious reader will see things here that make them reach beyond their old beliefs. How do the authors do this? Well, part of the answer is simple old-fashioned hard work, since Smart Grid (R)evolution is the result of years of the gathering of information by three talented and complementary scholars, with a track record of producing good work together.

But, it’s not just hard work that makes this book good. There is also an intellectual framework, a conceptual structure, of real merit.

The authors’ approach is not just technical or economic, but they also consider and present the social and political elements of reaching a social consensus.

This process can be labeled ‘socio-technical systems analysis.” The label sounds arcane, but it reflects the deep roots and fundamental value of the approach used here.

The authors (like most of us) have emerged from an intellectual tradition that (since the Enlightenment) has increasingly treated knowledge as divided into what Lord Snow called ‘Two Cultures, ” one focused on literature and social understanding, and the other dedicated to technical and scientific rigor.

Fortunately, the authors of this book recognize that few important questions are solely technical and few are solely social. A smart meter’s real meaning emerges only as part of a smart grid, just as a smart phone’s merit fades if not connected to a smart network.

And a smart grid, like a smart network, requires co-ordination among human beings as much as it requires frequency regulation. More generally, the history of technical change illustrates the significance of what I have called ‘the heaviness of existing reality.”

Moving past the heaviness of current investment requires thinking seriously, and sympathetically, about social and political issues as well as about engineering ones.

Yet, the converse is also true; mere social consensus (or even political unanimity) about goals will not hold back an incoming tide or alter “an inconvenient truth.”

The only likely path forward is to blend social and technical analyses in ways that bridge the divide between “The Two Cultures,” This book’s deepest and most important strength is that it will help its readers do just that.

Michael Dworkin is a Professor of Law and Director of the Institute for Energy and the Environment at Vermont Law School.

In the past, he was Chairman of the Vermont Public Service Board, President of the New England Conference of Public Utilities, and Member of the Executive Committee of the Electric Power Research Institute.