Home A Special Books So Good They Can’t Ignore You: Why Skills Trump Passion in... 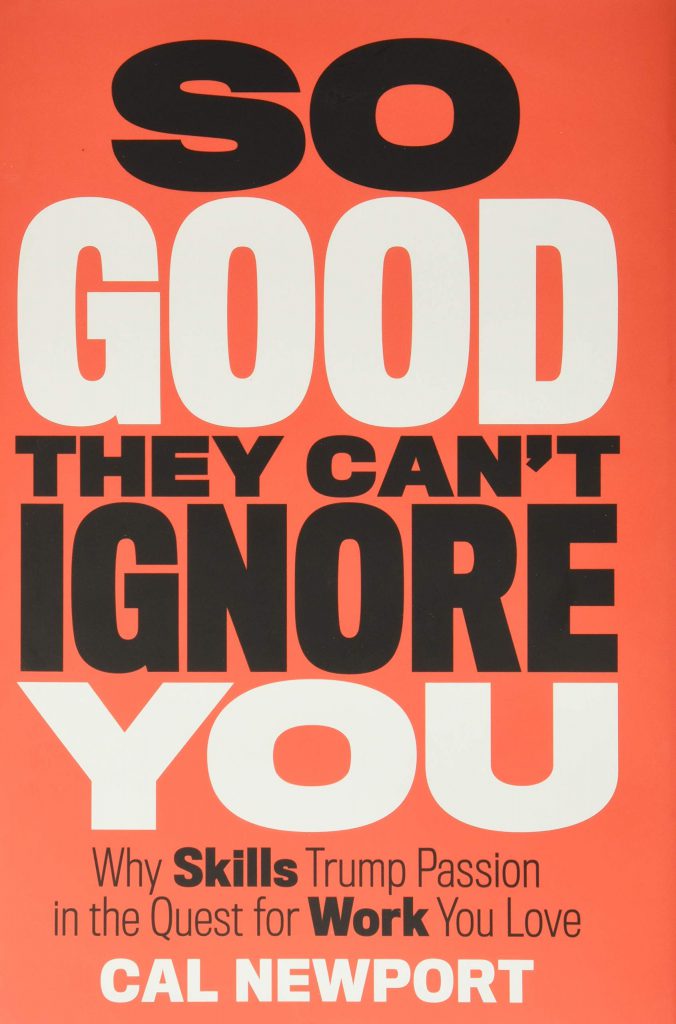 So Good They Can’t Ignore You: Why Skills Trump Passion in the Quest for Work You Love By Cal Newport

Cal Newport’s clearly-written manifesto flies in the face of conventional wisdom by suggesting that it should be a person’s talent and skill – and not necessarily their passion – that determines their career path.

Newport, who graduated from Dartmouth College (Phi Beta Kappa) and earned a PhD. from MIT, contends that trying to find what drives us, instead of focusing on areas in which we naturally excel, is ultimately harmful and frustrating to job seekers.

The title is a direct quote from comedian Steve Martin who, when once asked why he was successful in his career, immediately replied: “Be so good they can’t ignore you” and that’s the main basis for Newport’s book. Skill and ability trump passion.

Inspired by former Apple CEO Steve Jobs‘ famous Stanford University commencement speech in which Jobs urges idealistic grads to chase their dreams, Newport takes issue with that advice, claiming that not only is thsi advice Pollyannish, but that Jobs himself never followed his own advice.

From there, Newport presents compelling scientific and contemporary case study evidence that the key to one’s career success is to find out what you do well, where you have built up your ‘career capital,’ and then to put all of your efforts into that direction.

In this eye-opening account, Cal Newport debunks the long-held belief that “follow your passion” is good advice. Not only is the cliché flawed-preexisting passions are rare and have little to do with how most people end up loving their work-but it can also be dangerous, leading to anxiety and chronic job hopping.
After making his case against passion, Newport sets out on a quest to discover the reality of how people end up loving what they do. Spending time with organic farmers, venture capitalists, screenwriters, freelance computer programmers, and others who admitted to deriving great satisfaction from their work, Newport uncovers the strategies they used and the pitfalls they avoided in developing their compelling careers.

Matching your job to a preexisting passion does not matter, he reveals. Passion comes after you put in the hard work to become excellent at something valuable, not before.

In other words, what you do for a living is much less important than how you do it.
With a title taken from the comedian Steve Martin, who once said his advice for aspiring entertainers was to “be so good they can’t ignore you,” Cal Newport’s clearly written manifesto is mandatory reading for anyone fretting about what to do with their life, or frustrated by their current job situation and eager to find a fresh new way to take control of their livelihood. He provides an evidence-based blueprint for creating work you love.
So Good They Can’t Ignore You will change the way we think about our careers, happiness, and the crafting of a remarkable life.

So Good They Can’t Ignore You PDF