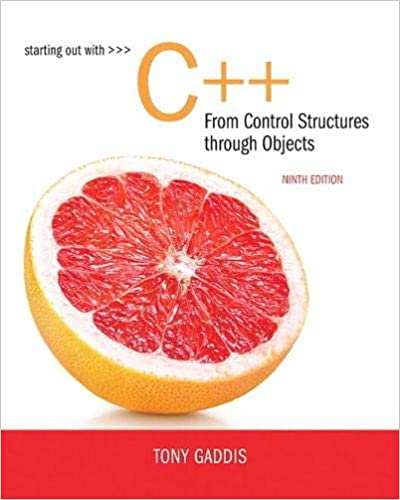 If you are looking to get yourself familiar with C++ in the depth, then Starting out with C++ by Tony Gaddis is the right choice for you. It has a step-by-step presentation that helps beginners to understand the important concepts of C++ programming language.

For two-semester courses in the C++ programming sequence, or an accelerated one-semester course. A clear and student-friendly way to teach the fundamentals of C++ Starting Out with C++: From Control Structures through Objects covers control structures, functions, arrays, and pointers before objects and classes in Tony Gaddis’s hallmark accessible, step-by-step presentation. His books help beginning students understand the important details necessary to become skilled programmers at an introductory level.

Starting Out with C++: From Control Structures through Objects covers control structures, functions, arrays, and pointers before objects and classes in Tony Gaddis’s hallmark accessible, step-by-step presentation. His books help beginning students understand the important details necessary to become skilled programmers at an introductory level. Gaddis motivates the study of both programming skills and the C++ programming language by presenting all the details needed to understand the “how” and the “why”–but never losing sight of the fact that most beginners struggle with this material. His approach is gradual and highly accessible, ensuring that students understand the logic behind developing high-quality programs. As with all Gaddis texts, clear and easy-to-read code listings, concise and practical real-world examples, and an abundance of exercises appear in every chapter. Updates to the 9th Edition include revised, improved problems throughout and a new chapter featuring completely rewritten and expanded material on the Standard Template Library (STL).

The array and vector classes

The various types of iterators

The map, multimap, and unordered_map Classes

The set, multiset, and unordered_set Classes

Chapter 3 now mentions the round function, introduced in C++ 11.

In Chapter 8, the bubble sort algorithm has been rewritten and improved.
A new example of sorting and searching a vector of strings has been added to Chapter 8.

In Chapter 9, the section on smart pointers now gives an overview of shared_ptrs and weak_ptrs, in addition to the existing coverage of unique_ptrs.

In Chapter 10, a new In the Spotlight section on string tokenizing has been added.
Chapter 10 now covers the string-to-number conversion functions that were introduced in C++ 11.

The material on unions that previously appeared in Chapter 11 has been moved to Appendix K, available on the book’s companion Website.

Several new topics were added to Chapter 14, including:

Checking for self-assignment when overloading the = operator.

Several new programming problems have been added throughout the book.

Starting Out with C++ from Control Structures to Objects PDF