Home General Subjects Books Chemistry Books Strategies and Applications in Quantum Chemistry by Ellinger and De Franceschi
Strategies and Applications in Quantum Chemistry, 14th Volume by Ellinger and De Franceschi :: After a promising start in the mid twenties, Quantum Chemistry then faced the first technological block: the numerical barrier. The consequence has been a flourishing of concepts still found in the present literature and in the common langage of all physico-chemists when it comes to understanding the basic phenomena.Then appeared the time of computers. Quantum chemists developed semi-empirical codes that rapidly evolved into ab-initio complex systems of programs. According to their optimistic or pessimistic views, colleagues have seen this period either as that of semi -quantitative or of semi-qualitative theoretical chemistry. Very recently came the age of super computers, and a generation of quantum chemists have seen their dream come true: at last, the quality of the calculation is in harmony with the quality of the concepts.
At a time when an increasing number of chemists are being dangerously attracted by the fascination of supposedly easy computing, it seemed an appropriate opportunity to dedicate a volume to Gaston Berthier. Born in 1923, a year in which the scientific community celebrated the 10th anniversary of Bohr’s quantum theory of the atom, but also the year when de Broglie published the fundamental idea that the orbit of an electron is linked to a stationary condition on the associated wave, Gaston Berthier took part in all the evolution and unavoidable conflicts between the anciens and the modernes at each stage of development of the discipline. Often in advance of his time, but never rejecting the past, Gaston Berthier has inspired generations of young, and less young, scientists in almost every branch of theoretical chemistry and its applications to experiment.
The title “Strategies and Applications in Quantum Chemistry” was chosen to illustrate his dual philosophy. The response of former collaborators of Berthier, often former students, always friends, has been overwhelming, as is evident from the size of this book. Most of the signatures come from the community of the Theoretical Chemists of Latin Expression, a melting pot conceived by Berthier and a few others. The contributions range from the prefaces with a personal assessment by the first witnesses of Berthier’s beginning through a series of articles covering basic developments in MCSCF theory, perturbation theory, basis sets, charge densities, wave function instabilities, correlation effects, momentum space theory, through contributions to understanding EPR spectroscopy,magnetic properties, electric field effects, electronic spectra, interaction between radiation and molecular structures, puzzling astrophysical systems, clusters and, as an opening to a different world, muonium chemistry. Although the broad spectrum of Quantum Chemistry represented by the thirty or so articles contained in this volume only partially reflects the variety and richness of Berthier’s preoccupations, it should convey to the coming generation of quantum chemists and to all readers the useful lesson of an outstanding chemist maintaining wide interests and resisting the drift of fashion. 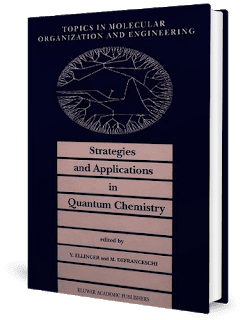 Strategies and Applications in Quantum Chemistry, 14th Volume by Ellinger and De Franceschi

Strategies and applications in quantum chemistry