Home A Special Books Subtle Is the Lord: The Science and the Life of Albert...

Subtle Is the Lord: The Science and the Life of Albert Einstein

The Science and the Life of Albert Einstein by Pais 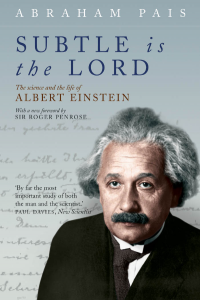 2005 has been designated “World Year of Physics” to celebrate the publication of Einstein’s Theory of Relativity one hundred years ago. In commemoration of this landmark anniversary, Oxford University Press brings Abraham Pais’ major work on Einstein’s life and work to a whole new generation of readers.Since the death of Albert Einstein in 1955 there have been many books and articles written about the man and a number of attempts to “explain” relativity. Throughout the preparation of this book, Pais has had complete access to the Einstein Archives and the invaluable guidance of the late Helen Dukas – formerly Einstein’s private secretaryWritten with Pais’ intimate and incomparable knowledge of Einstein, Subtle is the Lord will delight and inspire anyone fascinated by the man whose revolutionary ideas have defined modern physics.

The Science and the Life Contents

The world of science is greatly fortunate that a theoretical physicist of the distinction of Abraham Pais should have discovered within himself not only a particular talent for scientific biography but also a passionate desire to convey to us his unique perspective on the momentous developments in 20th-century physics that he had witnessed.

Himself a very significant later contributor, Pais had been well acquainted with most of the key figures in this highly remarkable period of scientific development, and he was able to combine his own deep understanding of the central physical ideas with personal knowledge of these individuals.

Pais had worked with Niels Bohr in 1946 and later wrote a comprehensive biography of Bohr’s life and work.

Subsequently, he provided short biographies of many other outstanding figures of the time, with whom he had been personally acquainted, such as Paul Dirac, Wolfgang Pauli, John Von Neumann, and Eugene Wigner.

But the book that launched Pais’s biographical career was his landmark biography of Einstein, entitled “Subtle is the Lord”, the title being an English translation of part of a quotation from Einstein (inscribed, in 1930, in marble above the fireplace in the faculty lounge of the mathematics building in Princeton) which in the original German reads “Raffiniert ist der Herrgott aber boshaft ist er nicht.” Pais translates this as “Subtle is the Lord, but malicious He is not”.

Subtle is the Lord– ”: the science and the life of Albert Einstein PDF