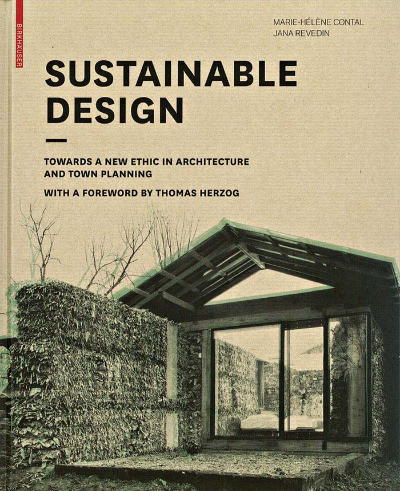 Sustainable Design Towards A New Ethic In Architecture and Town Planning

Marie-Hélène Contal, born in Nancy, France, in 1956, studied architecture in Nancy and political science and urbanism in Paris, taking her diploma in 1981.

In 1982 she started her career guiding the greater projects of Vittel, specializing in the following years as an architectural critic at Archi-Créé.

Since then she has been responsible for the scientific and didactic activities, planning nationally and internationally acclaimed expositions, symposiums, and publications, such as “Constructive Provocation” about the rational architecture school of the Austrian region Vorarlberg, a milestone in sustainable design.

Her critical work on the role of the planner and architect in a contemporary urban and political context that moves toward sustainability has been published in several European countries.

On behalf of the European program “EU Culture 2000”, she launched the gau: di actions on sustainable architecture for the profession and the greater public, creating a biennial European student competition on sustainable design, pedagogic programs for kids, archival work on avant-garde architects’ heritage, and an international stock-exchange for architecture critics.

Since 2006 she has worked on the creation of the Global Award for Sustainable Architecture on behalf of the Cité de l’Architecture of Paris and an international scientific board of specialized architecture centers and schools.

In 2009 she served as curator of “International Experiences in Sustainable Architecture,” part of the exhibition “The Ecological Habitat,” at the Cité de l’Architecture in Paris.

Jana Revedin, born in Constance, Germany, in 1965, studied architecture in Buenos Aires, Princeton, and at Milan Polytechnic, wherein 1991 she was awarded her diploma with a thesis entitled The Concept of Open Space in the Social Architecture of German Avant-Gardes.

From 1991 she taught as Aldo Rossi’s assistant at the IUAV Venice, receiving her diploma in architecture teaching and taking her Ph.D. with a dissertation entitled Monument and Modernity: Elements in the Construction of the Avant-Garde Town.

In 1996, she created her own architectural practice in Venice and in Villach, Austria. This professional decision—to begin immediately by building a practice with a European dimension—proved decisive, giving her access to new research on sustainable architecture.

Her dual Italian and rationalist German culture gives her a special eye for this movement. As an architect, Jana Revedin has a predilection for timber construction and for sustainable mixed structures, using local, recyclable materials.

Her productions include passive energy housing programs and public buildings as much as renovations of historical works and interior design.

With a specialization in the Early German Moderns, she has published numerous works on architecture and public spaces in the Modern Movement. In 2005 she was selected to be the curator of the biennial gau: di European Student Competition on Sustainable Architecture, launched by the Cité de l’Architecture et du Patrimoine of Paris and co-produced by a European network of specialized universities.

In 2006 she became the creator and curator of the Global Award for Sustainable Architecture, the first international architecture prize that honors sustainable design worldwide.

Durability, internal flexibility in terms of use, adaptability to new technologies in the supply, disposal and telecommunications sectors, suitability for dismantling and possible re-election, the conversion and recycling possibilities; but of course, in particular, suitability for the use of solar energy for the purposes of heating, cooling, for using daylight, and generating electricity.

But I think that complete energy autonomy is required only in exceptional cases. The amount of radiation this earth receives from the sun is many times higher than mankind’s energy needs will ever be.

The question is how to exploit this potential. It is a fact that the amount of energy consumed to meet buildings’ thermal needs is already a quarter or a fifth of what was achieved only a few years ago.

Today we should make these results effective across the board, instead of flirting with so-called “zero energy buildings.” Ultimately it is not about an Olympic discipline, but about looking at the matter as a whole and saving energy dramatically, or using solar energy.

So we must apply the way we look at energy for a single building to whole towns and cities, and take a similar approach to that used in the single building field: note all the relevant factors, understand how they interact, and develop new models that can be integrated into the existing system.

I would particularly like to warn against believing that there are recipes for this. Cities indeed share some basic phenomena, but these vary greatly in their quality and internal relations.

In any city, it is about the buildings, but also about the traffic generated by town planning, supply and disposal systems, potential energy sources, options for changing the status quo, and a great deal more.

I am convinced that architects have a key role to play in the extremely complex field of the world-wide ecological crisis because this impacts directly on their professional responsibility.

When all is said and done about 40% of primary energy is used for building and running buildings, at least in Central Europe. Then additional quantities of fossil energy are used as a result of town planning measures.

The concept of sustainability stands at the center of efforts to develop an architecture capable of meeting the challenges of the future. In urban structures as well as in design and the details of execution, sustainable architecture demands a value-preserving, resource-friendly approach to materials and construction. It was in large part in order to do justice to this development that in 2007, the Cité de l Architecture et du Patrimoine and Jana Revedin created the international Global Award for Sustainable Architecture, which honors architects who have specifically excelled in the area of sustainability.
This book documents the work of the prizewinners for 2007 and 2008. A first section introduces the work and thought of each architect, while a second takes an in-depth look at two or three projects that illustrate their distinctive approach. The 2007 prizewinners are Stefan Behnisch, Germany; Balkrishna Doshi, India; Françoise-Hélène Jourda, France; Hermann Kaufmann, Austria; and Wang Shu, China. For 2008, the honorees are Fabrizio Carola, Italy/Mali; Philippe Samyn, Belgium; Carin Smuts, South Africa; Andrew Freear and his Rural Studio, USA; and Alejandro Aravena for Elemental, Chile.

Sustainable Design: Towards a New Ethic in Architecture and Town Planning PDF

Related Results : sustainable design towards a new ethic in architecture and town planning,