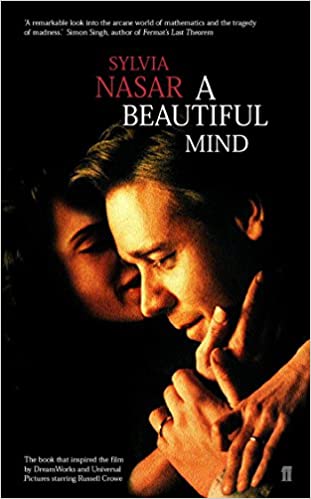 A Beautiful Mind By Sylvia Nasar

A Beautiful Mind is a biography of Nobel Prize-winning economist and mathematician John Forbes Nash, Jr. by Sylvia Nasar, professor of journalism at Columbia University. An unauthorized work, it won the National Book Critics Circle Award in 1998.

Thus begins the true story of John Nash, the mathematical genius who was a legend by age thirty when he slipped into madness, and who thanks to the selflessness of a beautiful woman and the loyalty of the mathematics community emerged after decades of ghostlike existence to win a Nobel Prize for triggering the game theory revolution. The inspiration for an Academy Award–winning movie, Sylvia Nasar’s now-classic biography is a drama about the mystery of the human mind, triumph over adversity, and the healing power of love.

This is the book that inspired the film of the same name staring Russell Crow. Whilst elements of the story are similar, anyone coming to the book from the film, as I did, will find a more complex, interesting, and, on occasions, unlikeable Nash than the Hollywood version.

Starting with his early, pre-illness, days, Nash begins as a typically brilliant, temperamental, and eccentric genius. He knew it too with his interpersonal skills making him aloof and arrogant. Although it might have been wonderful to meet the early Nash, it is hard to see how one would have liked him. It seems astonishing, therefore, that anyone would feel romantically attracted to Nash, much less devote their life to his care, but this is exactly what Alicia Nash took on. The terrible effects of paranoid schizophrenia are evident in Nash’s decline into alternative realities, which threatened to end his life as much as his career. It is a terrible illness. That Nash was able to recover is perhaps testament to his determination to restart his career as well as the unfailing love of his wife. For me, the title of the book could easily belong to Alicia.

Nasar writes wonderfully well and she conveys the complexity of Nash’s thoughts and his decline into illness in extraordinary detail. Occasionally, as with all good biographies, you feel that the characters let you down and Nasar never shies away from telling the whole truth. Whilst her voice is silent through most of the book it is only at the end, when the prejudice against mental illness comes to the fore, that Nasar allows her own distaste of such bias to surface. It forms a fitting conclusion to this monumental work.