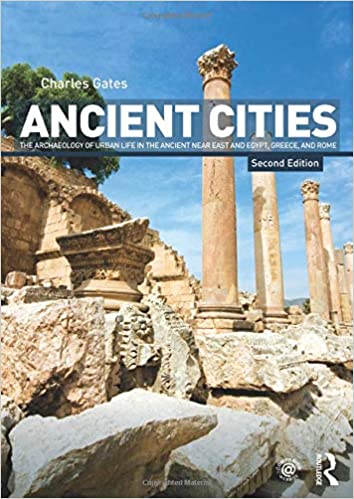 Ancient Cities: The Archaeology of Urban Life in the Ancient Near East and Egypt, Greece and Rome By Charles Gates

Ancient Cities surveys the cities of the Ancient Near East, Egypt, and the Greek and Roman worlds from the perspectives of archaeology and architectural history, bringing to life the physical world of ancient city dwellers by concentrating on evidence recovered from archaeological excavations. Urban form is the focus: the physical appearance and overall plans of the cities, their architecture and natural topography, and the cultural and historical contexts in which they flourished. Attention is also paid to non-urban features such as religious sanctuaries and burial grounds, places and institutions that were a familiar part of the city dweller’s experience. Objects or artifacts that represented the essential furnishings of everyday life are discussed, such as pottery, sculpture, wall paintings, mosaics and coins. Ancient Cities is unusual in presenting this wide range of Old World cultures in such comprehensive detail, giving equal weight to the Preclassical and Classical periods, and in showing the links between these ancient cultures.