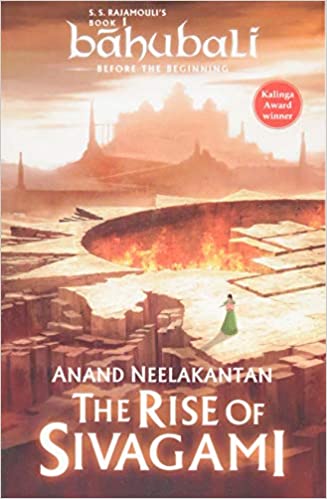 Baahubali Before the Beginning By Anand Neelakantan

The Rise of Sivagami: Baahubali Before the Beginning Book 1 is an Indian historical fiction novel written by Anand Neelakantan. It acts as a prequel to the film Baahubali: The Beginning. It was originally released in English on 7 March 2017, with Telugu, Hindi and Tamil versions released in April 2017

Blessed by the sacred Gauriparvat, Mahishmathi is an empire of abundance. The powerful kingdom is flourishing under its king, who enjoys the support and loyalty of his subjects, down to his lowly slaves. But is everything really as it appears, or is the empire hiding its own dirty secret?

Orphaned at a young age and wrenched away from her foster family, Sivagami is waiting for the day she can avenge the death of her beloved father, cruelly branded a traitor. Her enemy? None other than the king of Mahishmathi. With unflinching belief in her father’s innocence, the fiery young orphan is driven to clear his name and destroy the empire of Mahishmathi against all odds. How far can she go in her audacious journey?

From the pen of masterful storyteller and bestselling author Anand Neelakantan, comes The Rise of Sivagami, the first book in the series Baahubali: Before the Beginning. A tale of intrigue and power, revenge and betrayal, the revelations in The Rise of Sivagami will grip the reader and not let go.