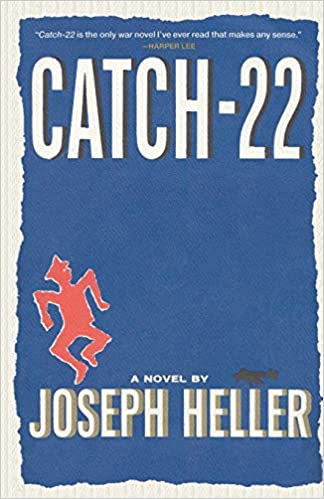 Catch-22 is a satirical war novel by American author Joseph Heller. He began writing it in 1953; the novel was first published in 1961.

Catch-22 is a satirical war novel by American author Joseph Heller. He began writing it in 1953; the novel was first published in 1961. Often cited as one of the most significant novels of the twentieth century, it uses a distinctive non-chronological third-person omniscient narration, describing events from the points of view of different characters. The separate storylines are out of sequence so the timeline develops along with the plot The novel is set during World War II, from 1942 to 1944. It mainly follows the life of the antihero Captain John Yossarian, a U.S. Army Air Forces B-25 bombardier.

Most of the events in the book occur while the fictional 256th US Army Air Squadron is based on the island of Pianosa, in the Mediterranean Sea, west of Italy, though it also covers episodes from basic training at Lowry Field in Colorado and Air Corps training in Santa Ana, CA. The novel examines the absurdity of war and military life through the experiences of Yossarian and his cohorts, who attempt to maintain their sanity while fulfilling their service requirements so that they may return home.

A darkly comic and ambitious sequel to the American classic Catch-22. In Closing Time, Joseph Heller returns to the characters of Catch-22, now coming to the end of their lives and the century, as is the entire generation that fought in World War II: Yossarian and Milo Minderbinder, the chaplain, and such newcomers as little Sammy Singer and giant Lew, all linked, in an uneasy peace and old age, fighting not the Germans this time, but The End. Closing Time deftly satirizes the realities and the myths of America in the half century since WWII: the absurdity of our politics, the decline of our society and our great cities, the greed and hypocrisy of our business and culture — with the same ferocious humor as Catch-22. Closing Time is outrageously funny and totally serious, and as brilliant and successful as Catch-22 itself, a fun-house mirror that captures, at once grotesquely and accurately, the truth about ourselves.