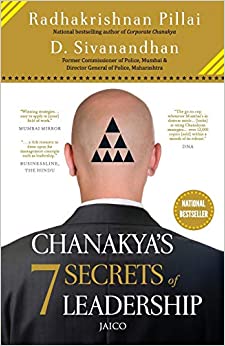 Chanakya’s 7 Secrets of Leadership By D. Sivanandhan and Radhakrishnan Pillai

Chanakyas 7 Secrets of Leadership is economics and leadership book by D. Sivanandhan and Radhakrishnan Pillai, published in 2015.

The famous author of ‘Arthashastra’, Chanakya is even today considered as a man who possessed immense intellect and it is not without any reason. He was the person who mastered statecraft thousands of years ago, wrote a treatise about and it is still relevant and practised by many till date.

A unique blend of practice and theory, Chanakya, way back in the 4th century BC, defined the concept of Saptanga or the seven pillars that are required to build an effective and strong kingdom. The pillars are: Amatya, Swami, Janapada, Kosha, Durg, Mitra iti pratikriya and Dand. Incorporated efficiently in this book, Radhakrishnan Pillai takes the example of D. Sivanandan, former DG of Police, Maharashtra to spread Chanakya’s teachings among the youth of India that also enables the current generation to reconnect with the nation’s glorious past.

In this well researched book that heavily relies upon classical literature, there is an adequate insight into the journey of a modern-day honest and capable leader in D. Sivanandan, who talks about his own views on being an upright and efficient manager. Thus, the book forms an effective bridge between classical wisdom and modern-day managerial skills and makes an effort to inspire young leaders of India for a better tomorrow.