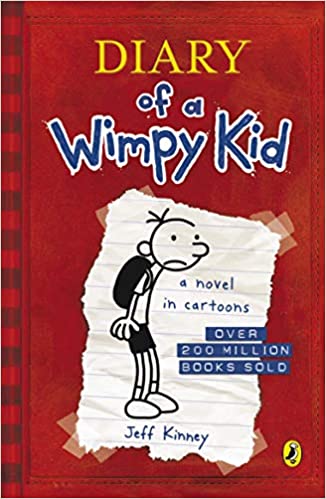 Diary of a Wimpy Kid By Jeff Kinney

Based on the adventures of an imaginary character Greg Heffley, The Diary Of A Wimpy Kid has been described as a ‘novel in cartoons’ that is designed as part of reading material for kids aged between eight and twelve years.

Often compared with J.K. Rowling, Jeff Kinney has aptly been able to portray a kid’s inner wall: a kid who is forced into maintaining a diary by his mum but will never submit to conventions.

Greg, the kid, maintains the fact that he is not writing just a diary, but rather a journal; He also sets out to warn the reader that there will never be any ‘Dear diary’ this and that in his writings.

Regarded as a great graphic novel series for kids, ‘Diary of a Wimpy Kid’ takes the reader on a whirlwind journey to the inner world of a new-age kid.