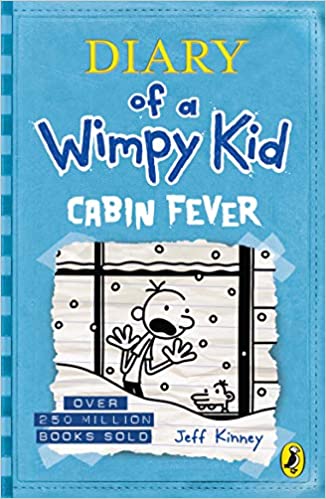 Diary of a Wimpy Kid: Cabin Fever By Jeff Kinney

The book, ‘Diary of a Wimpy Kid: Cabin Fever’ is the sixth book in the ‘Diary of a Wimpy Kid’ book series. This series revolves around a kid named Greg who is writing his life experiences in a journal. It is authored by Jeff Kinney and is one of the most popular children books of all times. This particular book is about the holidays of Greg and what he does when his family is trapped indoors because of a blizzard. This book was the fastest selling book of 2011. Furthermore, it received the ‘Best Author Children’s Choice Award’ by the Children’s Book Council in the year 2012. It was also nominated for the Harvey Award for a ‘Special Award for Humor in Comics’.

Greg is obsessed with the Net Kritterz, which is a popular gaming website. However, very soon Greg realizes that the next features of this website are unlocked only by paying money. Hence, to enjoy the paid features of this website, Greg looks to find some money making ideas. His friend Rowley helps him in this conquest. However, all their plans of generating money fail miserably leaving Greg in a not so ideal situation. This frustration forces them to start the Neighborhood Tattler, a tabloid newspaper.

Things then go from bad to worse as their newspaper is not generating enough advertisements which prompts them to think about starting their own holiday bazar. Greg tries to advertise about his products through posters but that plan backfires as the ink he uses in these posters is washed thanks to the rains. This act gets covered by community newspaper which leaves Greg in all sorts of trouble. How will he get away from all these troubles? Or is there more to the story?