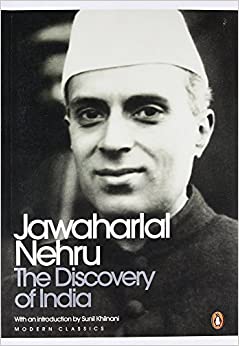 The Discovery of India By Pandit Jawaharlal Nehru

The Discovery of India was history book written by India’s first Prime Minister Pandit Jawaharlal Nehru during his imprisonment in 1942–1945 at Ahmednagar fort in present day Indian state of Maharashtra by the colonial authorities during the British Raj before the independence of India.

In conjunction with the Jawaharlal Nehru Memorial Fund in New Delhi, Oxford proudly announces the reissue of Glimpses of World History and The Discovery of India, two famous works by Jawaharlal Nehru. One of modern day’s most articulate statesmen, Jawaharlal Nehru wrote a on a wide variety of subjects. Describing himself as “a dabbler in many things,” he committed his life not only to politics but also to nature and wild life, drama, poetry, history, and science, as well as many other fields. These two volumes help to illuminate the depth of his interests and knowledge and the skill and elegance with which he treated the written word.

Jawaharlal Nehru wrote the book ‘The Discovery of India’, during his imprisonment at Ahmednagar fort for participating in the Quit India Movement (1942 – 1946). The book was written during Nehru’s four years of confinement to solitude in prison and is his way of paying an homage to his beloved country and its rich culture.

The book started from ancient history, Nehru wrote at length of Vedas, Upanishads and textbooks on ancient time and ends during the British raj. The book is a broad view of Indian history, culture and philosophy, the same can also be seen in the television series. The book is considered as one of the finest writing om Indian History. The television series Bharat Ek Khoj which was released in 1988 was based on this book.

The discovery of India PDF