Electric Machinery By A. E. Fitzgerald 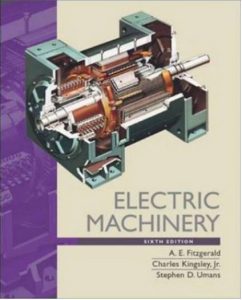 Electric Machinery has been extensively updated while retaining the emphasis on fundamental principles and physical understanding that has been the outstanding feature of this classic book. This book covers fundamental concepts in detail as well as advanced topics for readers who wish to cover the material in more depth. Several new chapters have been added, including a chapter on power electronics, as well as one on speed and torque control of dc and ac motors. This edition has also been expanded with additional examples and practice problems. The use of MATLAB has been introduced to the new edition, both in examples within the text as well as in the chapter problems. Key features Each chapter includes quantitative examples to illustrate important concepts. Practice problems with solutions accompany many of the examples for further reinforcement. These features have been clearly illuminated through the design to make it easy for the reader to locate them.A new chapter on power electronics introduces the basic components of power electronics as well as typical circuit configurations for rectification and inversion that are found in modern motor drives.A new chapter on speed and torque control of dc and ac motors has also been added. This chapter introduces the basic concepts of motor drives for dc and ac machines and includes a discussion of the technique of field-oriented control, which is widely used in modern drive systems.The chapter on single- and two-phase motors now includes a generalized analytical formulation for unsymmetrical two-phase induction machines. This formulation is then applied to the general case of a single-phase induction motor running off both its main and auxiliary winding. This formulation is unique to Electric Machinery and is not found in other text books.The popular interactive computer software MATLAB has been introduced in the new edition in both examples and practice problems. In addition, chapter problems have been added which specifically require the use of MATLAB. An icon has been placed in the margin to indicate those places where MATLAB is used.A website for this book includes a downloadable version of the solutions manual, password-protected for instructors. The website will also serve as a source for additional examples, problems and MATLAB examples. It will also contain a set of PowerPoint slides of figures from the book for instructors to use in their lectures.

This book has 11 chapters. Lets see the contents of this books: