How They Started How 25 Good Ideas Became Great Companies 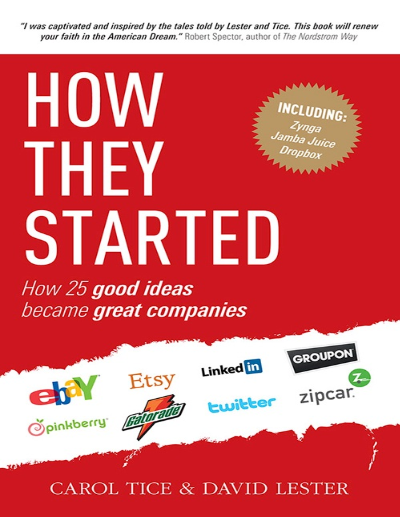 How They Started Contents

Most of us have come across an idea we think would make an awesome business. That sixth sense, a this-is-special moment when you’re standing in a place that’s crying out for a new restaurant/bar/whatever.

Or you get that feeling of boiling frustration with a product or experience and think “this should be so much better.” Truth is, most of us don’t act on those would-be killer thoughts.

This book is about the people who did. It tells the remarkable stories of people who had innovative ideas and built them into some of the hottest businesses on the planet.

From afar, the scorching success these companies have had makes it look easy. It’s not. The stories themselves are as compelling as most novels, with more twists and turns than most founders would have anticipated.

It’s probably better they didn’t know what lay ahead, or they might never have started at all. We decided to write this book to look much more deeply into why and how some of America’s most successful companies got started.

It seems much harder to set something up from nothing than to take something that’s working and grow it. And we’ve found it even more fascinating than we’d expected.

How we selected the companies featured Of all the many stand-out companies, how did we come up with this list? We started with the idea that we wanted to write about companies most people knew about. That way, the stories are more real, and also more enjoyable.

We knew we wanted a variety—some of America’s established corporate giants as well as plenty of more recent, fresh and disruptive startups, which will be more helpful to anyone currently starting up, or thinking about doing so.

We also knew we wanted a selection of business types—for all the opportunities and great startups in the technology, this nation is home to many young, game-changing companies in other sectors, too.

And we wanted founders from a variety of cities and backgrounds. Finally, we wanted entertaining stories—and we weren’t disappointed.

We hope that after reading this book, many of you will feel more confident about acting on an idea you might have to start or expand a small business. That’s part of the job we hope this book does. But some of you will also be struck by how hard it can be to build a business to that level. And how risky.

If some of you finish this book and decide that starting up might not be for you after all, then we will still have accomplished something worthwhile. We don’t believe everyone should start a business. We are often asked what it takes to start a company and make it a success.

Part of what it takes is the resilience and commitment to get through the hard times that almost every startup will face along the way. Not everyone has that.

What else does it take? The stories here give us the same answer as the hundreds of other entrepreneurs we have interviewed or gotten to know.

Mainly, it takes an innovative idea, passion, and commitment. With enough of that, everything else should follow.

The other essential qualities include a willingness to work unbelievably hard, getting at least comfortable with simple business finances, and the ability and determination to focus. What about luck? “Be lucky.” “Good luck.” We use phrases like this all the time.

How important is luck to a startup? You will surely make your own mind up as you read the chapters here. Our sense is that most entrepreneurs make their own luck.

As the saying goes—the harder you work, the luckier you get. There are occasions when an entrepreneur gets lucky, but so long as you work hard and do the right things, at some stage “luck” is likely to happen to you, too.

The people who appear luckiest are usually the ones who have looked around and seen an opportunity and have worked their tails off to make it happen.

One surprising theme in the book is education and money—and in some cases, the lack of both. Sure, both help, but not having a college degree or wealthy parents is no longer a barrier to starting your own business.

It’s the American Dream—if you work real hard, you can still come from nothing, build a business of your own, and make it successful. For over a hundred years, this country has spawned bold and ambitious companies that have led the world in many different sectors.

And arguably, this has never been more true than now, with American entrepreneurs leading the world in many fields. And that is no coincidence.

America is a truly great country for a startup. The culture is unusually open to new ventures, which means it is cooler and more acceptable to start a business here than in probably any other country.

There is much better access to financing than anywhere else, too the business angel and venture capital communities are better developed and more open to startups.

There are many top-notch business schools and unrivaled support magazines, websites and blogs, books, and so on. And right now, America offers the biggest market in the world; all-accessible with a common language and robust infrastructure.

Taken together, these are huge advantages. Against that, there is probably more competition here than any place else, too.

There has probably never been a better time to start a new business there is more affordable technology lowering the barriers to entry, new digital opportunities everywhere and more help and resources to support entrepreneurs than ever before.

Today, you can set up faster and cheaper than ever before, and access national and international markets straight away.

We hope that some of you will read this book and be so inspired you go on to build a great company and feature in a new edition a few years from now.

How do you turn a good idea into a great business?
Lots of us have ideas we think would make great businesses. Most of us never do anything with those ideas. Maybe it’s because we’re really happy with our jobs, maybe it’s because we’re not confident that our idea would really work. Or maybe it’s simply because we don’t know where to start.
This book is about 25 like you. They had an idea, and went on to start a business. Those businesses are all extremely successful and most are now household names all across America.
With success stories ranging from retail and gaming to social media and the restaurant business, How They Started relives the humble beginnings of companies such as Coca-Cola and Disney, Google and Twitter, Zynga and Chipotle Grill. Through personal interviews with key sources – including founders, investors and past employees – each profile reveals how the company took its first tentative steps and subsequently became the famous name it is today.
Written by Carol Tice, regular writer for Entrepreneur Magazine, and David Lester, who set up a highly successful software company in Farmington, CT and now runs a company dedicated to supporting start-ups and entrepreneurs, How They Started is an enlightening and fascinating book that answers key questions for each business, such as:
• What happened first?
• How did they choose their name?
• How much did it cost to set up?
• Where did they find suppliers?
• How did they get their first customers?
• What problems did they run into – and how did they overcome them?
Profiles include: Blackberry, Chipotle Grill, Coca-Cola, Disney, Dropbox, eBay, Electronic Arts, Etsy, Gatorade, Google, Groupon, IBM, Jamba Juice, KFC, LinkedIn, Microsoft, Nintendo, Pinkberry, Spanx, Trip Advisor, Twitter, Wholefoods, Zipcar, Zynga.

How they started: how 25 good ideas became great companies PDF