Home Tags How to win every argument by madsen pirie 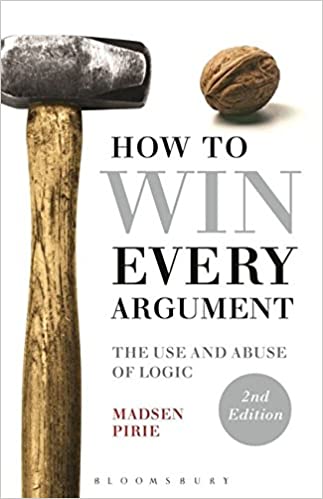 How to Win Every Argument By Madsen Pirie

How to Win Every Argument: The Use and Abuse of Logic is self help book by Madsen Pirie, published in 2006.

In the second edition of this witty and infectious book, Madsen Pirie builds upon his guide to using – and indeed abusing – logic in order to win arguments. By including new chapters on how to win arguments in writing, in the pub, with a friend, on Facebook and in 140 characters (on Twitter), Pirie provides the complete guide to triumphing in altercations ranging from the everyday to the downright serious. He identifies with devastating examples all the most common fallacies popularly used in argument. We all like to think of ourselves as clear-headed and logical – but all readers will find in this book fallacies of which they themselves are guilty. The author shows you how to simultaneously strengthen your own thinking and identify the weaknesses in other people arguments. And, more mischievously, Pirie also shows how to be deliberately illogical – and get away with it. This book will make you maddeningly smart: your family, friends and opponents will all wish that you had never read it. Publisher’s warning: In the wrong hands this book is dangerous. We recommend that you arm yourself with it whilst keeping out of the hands of others. Only buy this book as a gift if you are sure that you can trust the recipient.

It’s an excellent book of fallacies. The layout is professional in appearance. The writing is concise and to the point. The author comes across as erudite and somewhat witty.

I would suggest to the reader to begin at the back of the book however. In the back the fallacies are divided in to five major categories. If one reads the book in order based on these classifications it is not hard to master the material (the problem with this approach is that the reader has to flip back and forth in the book, like a choose your own adventure book, but I think it is worth the effort). If one tried to read the book simply in the order it’s laid out in; that is, alphabetical, I think they would have a hard time of it.

If another edition comes out I would hope the publisher would change the format so the fallacies are arranged by classification.

Will you win every argument if you read this book? Ah, maybe. You will be able definitely recognize fallacies when they occur though, and that may help you win arguments, or at least point out how your opponents logic is flawed.

In summary, I think it’s an interesting well written book, the only major flaw being the alphabetical layout.